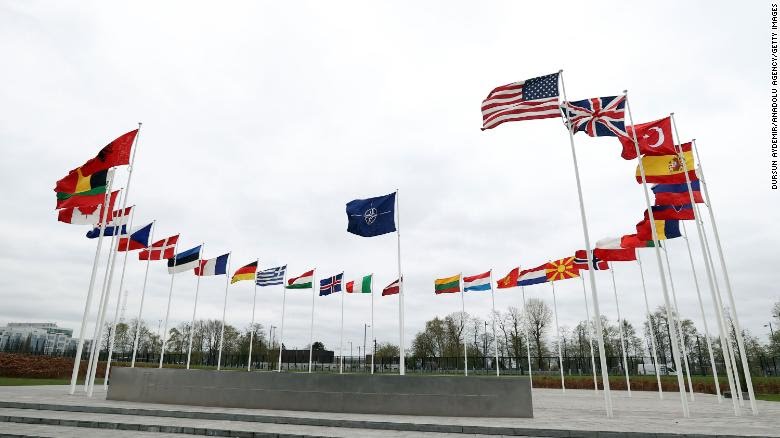 When Vladimir Putin launched his invasion of Ukraine, his goals were clear. He wanted to bring his neighbor to heel, assert Russian authority in Eastern Europe and make the West think twice about expanding militarily and politically toward Russia’s borders.

But in one important respect, Putin’s plan appears to have failed: The war has united the West against Moscow in ways that seemed unimaginable in January.

Now, Finland and Sweden — nations that are officially non-aligned — are edging ever closer toward joining NATO, the US-led military alliance.

Speaking at a joint news conference with her Swedish counterpart in Stockholm on Wednesday, Finnish Prime Minister Sanna Marin said her country’s decision on whether to apply for membership would be made within “weeks, not within months.”

“We need to have a view on the future and we are using this time to analyze and also build common views on the future when it comes to security,” Marin said. “I won’t give any kind of timetable when we will make our decisions, but I think it will happen quite fast. Within weeks, not within months.”

The Finnish government presented a wide-ranging report to the country’s parliament on Wednesday, which considered the effects of NATO membership.

The report says that if Finland and Sweden become full NATO members, “the threshold for using military force in the Baltic Sea region would rise,” enhancing “the stability of the region in the long term.”

The report says that the “most significant effect” of NATO membership “would be that Finland would be part of NATO’s collective defence, and be covered by the security guarantees enshrined in Article 5,” adding that the deterrent effect of being a NATO member would be “considerably stronger than it is at present, as it would be based on the capabilities of the entire Alliance.

The report warns that due to Russia’s “negative view towards NATO enlargement,” if Finland applied for NATO membership, it should be prepared for “risks that are difficult to anticipate.” It adds that Finland “would aim to continue to maintain functioning relations with Russia in the event it becomes a NATO member.”

The paper also noted that “close cooperation between Finland and Sweden during possible accession processes would be important,” and that “simultaneous accession processes” for the two countries could also “facilitate preparation for and response to Russia’s possible reaction.”

Sweden, meanwhile, is due to complete an analysis of its security policy by the end of May. A Swedish official previously told CNN that their nation could make its position public sooner, depending on when neighboring Finland does.

On Wednesday, Swedish Prime Minister Magdalena Andersson told the news conference that “the security landscape has completely changed” after Russia’s invasion of Ukraine and “given this situation we have to really think through what is best for Sweden and our security and our peace in this new situation.”

“This is a very important time in history. There is a before and after 24th of February,” Andersson said, referring to the date Russia’s invasion began. “We have to have a process in Sweden to think this through.”

Andersson was also asked to comment on reports in Swedish media that Sweden has already decided to join the alliance.

“Sometimes if you read some statements in Swedish media, it’s like you should be as quick as possible to make up your mind,” she responded. “I think you really have to analyze the new situation, do it very seriously, think about the consequences, the pros and cons of all potential ways forward.”

Public opinion in both countries has shifted significantly since the invasion, and NATO allies and officials are on the whole supportive of the two countries joining. The only serious objection could come from Hungary, whose leader is close with Putin, but NATO officials think it would be able to twist Prime Minister Viktor Orban’s arm.

Given that Putin started his war demanding that NATO roll its borders back to where they were in the 1990s, the fact this is even being considered represents a diplomatic disaster for Moscow. And if Finland in particular were to join, Putin would find Russia suddenly sharing an additional 830-mile border with NATO.

“We have repeatedly said that the alliance itself is more of a tool for confrontation. This is not an alliance that provides peace and stability, and further expansion of the alliance, of course, will not lead to more stability on the European continent,” he said.

Rob Bauer, the head of NATO’s military committee, told reporters on Tuesday that the alliance has not ruled out new members, but said it was ultimately up to Finland and Sweden to decide whether they want to join, Reuters reported.

“It is a sovereign decision of any nation that wants to join NATO to apply for membership, which they so far have not done … We are forcing no one into NATO,” Bauer said.

Nor has Putin’s invasion motivated Ukraine to pull back from its desire for closer integration with the West. While the country is unlikely to join NATO, its efforts to join the European Union have accelerated since the start of the war. This would take a very long time and could also face stiff opposition from Hungary, which is already in a nasty battle with Brussels over its violations of the rule of law, causing the EU to propose suspending central funding to Budapest.

However, once again, the fact it’s being talked about and the level of support among EU leaders and officials is another indication of just how united the West has become against Russia.

Nordic countries wonder if they are next on Putin&apos;s list

Nordic countries wonder if they are next on Putin’s list

It’s worth noting that since the start of the war, the West has remained largely united in its response to Russia, be it through economic sanctions or military support for Ukraine.

However, there are a few challenges coming up that will test how united this alliance against Russia really is.

First, if it emerges that Russia has used chemical weapons in Ukraine, there will be enormous pressure for the West, particularly NATO, to take an even more active role in the war — something the alliance has been reluctant to do so far.

NATO members have already discussed red lines and what action should be taken in the event of chemical weapons, but those details are still private to prevent Russia from taking pre-emptive protective action.

However, any NATO intervention would almost certainly lead to a less stable security situation in Europe, as the West would risk a military confrontation with Russia — a nuclear power, which would likely respond by intensifying its attacks on Ukraine and possibly in other areas of traditional Russian influence.

Second, the cost of living crisis in many European countries could soon test the unity of future Western sanctions on Russia and embargoes on Russian energy.

If, ultimately, the economy of Western Europe is deemed more important than holding Russia to account for waging war on its peaceful neighbor, then Putin could to some extent get away with invading an innocent country.

But for now, as that unity largely holds, it is clear that Putin’s desire to belittle the Western alliance has backfired — and that the strongman has secured pariah status for his nation, possibly for years to come.