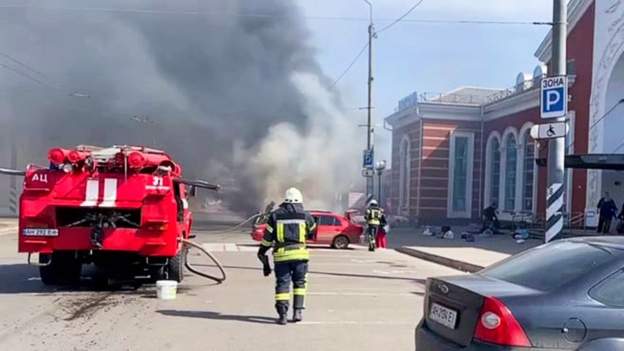 “Mining and blowing up residential buildings, hospitals and schools in Russian population centres,” are parts of their plans, Budanov said, according to Interfax-Ukraine news agency.

He also says they are planning “missile strikes on, and bombings of, Belgorod [near Ukraine’s eastern border with Russia] or a Crimean city [in the south of Ukraine]”.

Budanov went on to say it’s possible Russia will portray these acts as “justification for brutality against Ukrainian civilians” in Bucha, near the capital Kyiv, and the eastern city Kramatorsk.

There has been mounting evidence of atrocities committed against Ukrainian civilians in areas previously held by Russian forces, including Bucha.

Ukraine and Russia are building up forces in the eastern Ukrainian region of Donbas as Moscow switches the focus of its offensive. A senior Ukrainian official in the area told the BBC Russia was sending in new battalions, while our correspondent in the area says Ukraine is also deploying reinforcements.

Ukraine says it’s checking unverified information that Russia has used chemical weapons in its siege of Mariupol. The Azov battalion – a Ukrainian military unit with links to the far right – said its fighters had suffered minor injuries, including shortness of breath. The AfricanCamera correspondent cannot verify this allegation independently.

President Putin has made a rare public appearance alongside the leader of Belarus and described Russia’s military goals in Ukraine as noble. Putin said the main aim was to help the people of Donbas and that he’d had no choice but to send in Russian troops in February.

Ukraine’s president, Volodymyr Zelensky, has said in a speech to the Lithuanian parliament that the European Union was still too hesitant in sanctioning Moscow. He complained too many European companies wanted to continue “business as usual”.