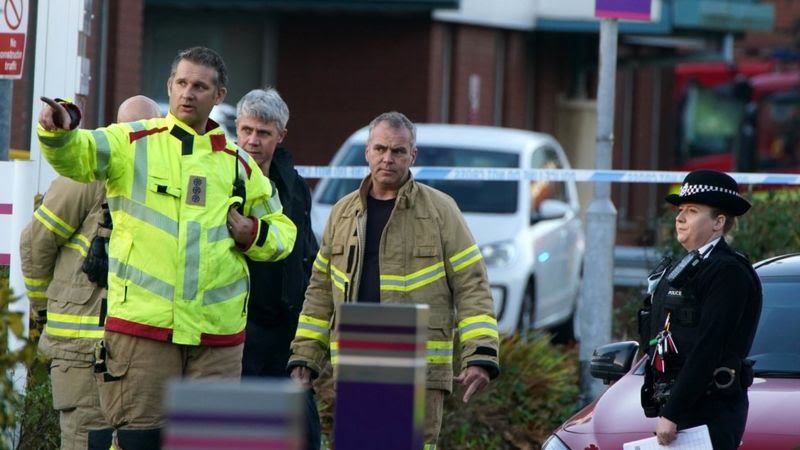 An explosion outside Liverpool Women’s Hospital on Remembrance Sunday has been declared a terror incident by police.

A taxi exploded and was engulfed in flames just before 11:00 GMT at a drop-off zone near the entrance, killing the passenger and injuring the driver.

The cabbie, named locally as David Perry, was declared a hero by Liverpool Mayor Joanne Anderson for locking the suspect inside the vehicle.

Four men have been arrested in the city under the Terrorism Act.

Head of Counter Terrorism Policing North West, Russ Jackson, said the taxi passenger appeared to have made an “improvised explosive device” which caused the blast.

Assistant Chief Constable Jackson said police knew the identity of the attacker but would not confirm it at this stage.

The man’s motivation was “yet to be understood”, he added.

“The fare – a man – had asked to be taken to Liverpool Women’s Hospital, which was about 10 minutes away,” he added.

“As the taxi approached the drop-off point at the hospital an explosion occurred from within the car. This quickly engulfed it in flames.”

Remarkably the taxi driver escaped from the cab.

Mr Jackson said the taxi driver had been released from hospital after being treated for his injuries.

He said police were “aware there were Remembrance events just a short distance away from the hospital and that the ignition occurred shortly before 11am”.

“We cannot at this time draw any connection with this but it is a line of inquiry we are pursuing,” he added.

Police say passenger brought explosive device into taxiPolice said a fourth man, aged 20, was arrested earlier in the Kensington area of the city and was in custody.

Three other men – aged 21, 26 and 29 – were detained on Sunday in Sutcliffe Street in Kensington.

Mr Jackson said the arrested men were believed to be “associates” of the taxi passenger.

He said officers were looking at the man’s associates, his telephone records and purchases he may have made.

All four men in custody will be interviewed later by counter-terrorism detectives.

Officers are searching two addresses – one in Sutcliffe Street and a second at Rutland Avenue where “significant items” have been found, police said.

A cordon is in place at both locations and eight families have been evacuated from their homes.

Mr Jackson said police had “attributed” the taxi passenger to both the addresses but were uncertain which one he lived at.

Neighbour Sharon Cullen said she was evacuated from her home near Sutcliffe Street by officers telling her “whatever is going on at the back of the house, it could blow the block”.

She said she thought four men aged in their 20s lived at the address.”I don’t know any of them but one [of] them always seemed to be on a PC in his bedroom,” she said.

People are being allowed in and out of Liverpool Women’s Hospital but officers could be seen at the entrance to the building and were stopping cars for checks as they entered the car park.

Patients have been told to attend appointments as normal but visiting arrangements have been restricted until further notice, the hospital said.