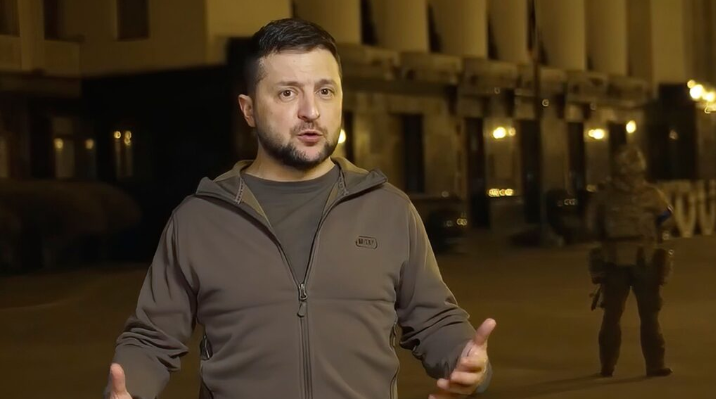 Ukrainian President Volodymyr Zelensky has called on people around the world to come “to your squares, your streets” to stand with Ukraine and against the war on Thursday.

He said in a late video address shot near the presidential offices in Kyiv that the war “breaks my heart, the hearts of all Ukrainians and every free person on the planet”. He called for people to visibly show their support for Ukraine starting from Thursday, exactly one month after Russia launched its invasion.

He said: “Come from your offices, your homes, your schools and universities. Come in the name of peace. Come with Ukrainian symbols to support Ukraine, to support freedom, to support life.

Elsewhere on Wednesday, on the eve of a Nato summit, Mr Zelensky called on the alliance to provide “effective and unrestricted” support to Ukraine, including any weapons the country needs to fend off the Russian invasion.

“We ask that the alliance declare that it will fully assist Ukraine to win this war, clear our territory of the invaders and restore peace in Ukraine,” he said.

Mr Zelensky will speak to the Nato summit by video, the president’s office said.

He appealed to Western countries to stay united in the face what he says are Russia’s efforts to “lobby its interests” with “some partners” to bring them over to its side.

“We will see who is a friend, who is a partner and who has sold out and betrayed us,” he said in an emotional speech. “Together we should not allow Russia to break anyone in Nato, the EU or G7, to break them and drag them to the side of war.”

Switching to Russian, Mr Zelensky appealed to Russians “to leave Russia so as not to give your tax money to the war”. Tens of thousands of Russians already have fled Russia since the war began, fearing the intensifying crackdown at home.