Poland has evidence of Russian war crimes in Ukraine 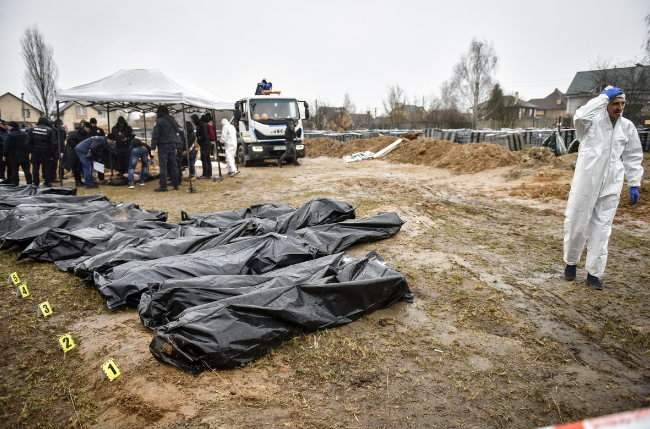 Poland has collected witness testimonies and other evidence of war crimes and crimes against humanity being committed in Ukraine, according to officials.

Forensic police officers exhume bodies from a mass grave discovered in Bucha, on the outskirts of Kyiv, Ukraine, on Friday, April 8, 2022.

National Prosecutor Dariusz Barski said in a media interview this week that Poland, Ukraine and Lithuania were conducting a joint investigation into Russian war crimes.

He told the polskatimes.pl website that Poland launched its probe at the request of Ukraine before the International Criminal Court (ICC) in the Hague opened its own investigation.

Barski said in the interview: “Ukraine asked us to assist with documenting the crime in Bucha.”

He added that “a team of Polish experts, including forensic pathologists and ballisticians, will travel to Bucha to collect evidence that can also be used in future international investigations.”

Polish authorities have issued special leaflets in the Ukrainian language for the purpose, he added.

Barski said that “only those who wanted to were interviewed, and only if they were in the right physical and mental state.” He added that interviewees were being provided with psychological help.

He also said that the investigation was being conducted in cooperation with the ICC, following a recent visit to Poland by the Hague-based court’s chief prosecutor, Karim Khan.

“Around 1,000 people have been interviewed so far,” Barski said.

He added: “I can only reveal that we have collected highly significant witness statements and other corroborating evidence showing that war crimes and crimes against humanity have been committed in Ukraine.”