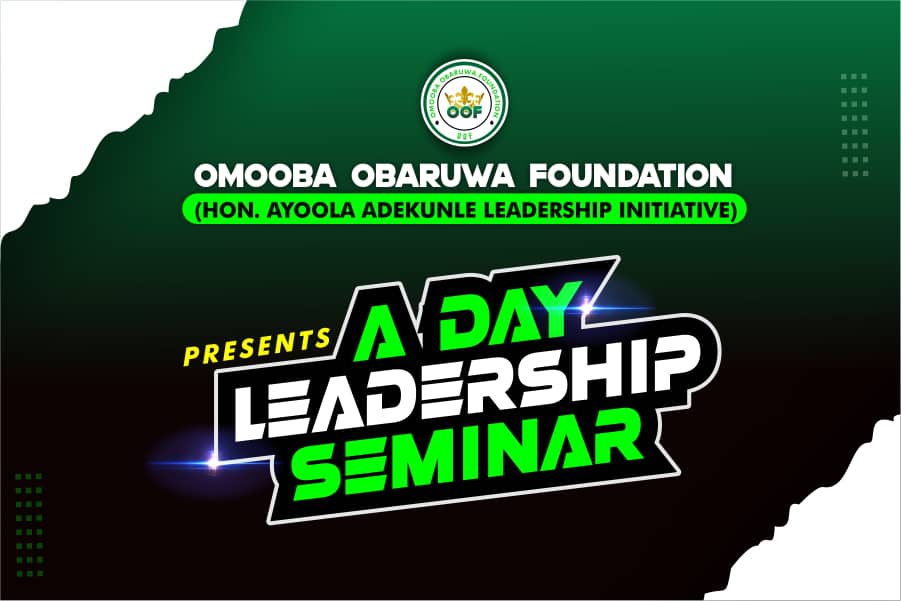 As part of efforts to address the lingering leadership crisis gap and equip the youths with the critical skills to take charge of leadership roles across all spheres of human endeavor, the Omooba Obaruwa Foundation (OOF) has put together students of the Ogbogbo Baptist Secondary School at a one-day leadership training in Ijebu-Ode Area of Ogun State.

No fewer than 100 students of Ogbogbo Baptist Secondary School attended the brainstorming training.

Omooba Obaruwa Foundation (OOF) is a nonpolitical and nonprofit organization committed to creating opportunities for young and aged people to channel their creativity, energy and aspirations to add value to their communities.

It also creates awareness amongst young people to develop interest in governance, social inclusion and participation in the democratic and political processes in Nigeria.

The training was attended by students and various youths from across the Ijebu-Ode Area to learn and benefits from the seminar hosts by the initiator of the program.

Disclosing the rationale for establishing the NGO, founder and chairman board of trustees of OOF when contacted by AfricanCamera correspondent, Omooba Adekunle Adebayo Ayoola said he deemed it necessary to float the organization so as to prod youngsters to take up leadership responsibilities in their communities and domains.

He noted that in order to boost the awareness of youth, OOF has incorporated a train the trainer model which will ensure that youths across the Ijebu-Ode and Odogbolu as well as local government and ward levels must receives leadership training so as to appreciate the importance of leadership across the board.

Ayoola said the training will create an enabling environment for students and especially youths outside the political sphere to cross-fertilize ideas that can proffer solutions to the myriad of challenges bedevilling the nation as it will get them prepared for taking the bull by horn when it’s time for them to lead their generation.

He added that the Omooba Obaruwa Foundation will serve as a bridge of hope that will link the current generation with the next generation adding that the leadership failure is a reflection of both the leaders and the led noting that collective action need to be taken to address the crisis holistically.

Also speaking, the principal Mr Awoleye and vice-principal of the school, Mr Oloko, Mrs Adenuga and other teachers in presence, lauded the OOF for the initiative saying that it is the springboard which the students and the youths needed to realize their true leadership potentials.

Mr Damilare Kazeem who was also in attendance, while speaking to Africancamera reporters, he noted that the interventions of Omooba Obaruwa Foundation on numerous programs and initiatives has assisted in preventing a number of youths from going into crimes and other forms of youth restiveness being sparked by unemployment.

Also speaking, the facilitator of the seminar, Mr Bolaji Femi Olalekan thanked the founder of OOF for forming the organization adding that it is the only way in addressing youth restiveness and harnessing the potentials of our youth.

In his comment, Mr Babatunde Oresanya, the ever committed chairman Omooba Obaruwa Foundation (OOF) pledged to continue supporting people with the little in capacity of OOF for the nation to reap the benefits.