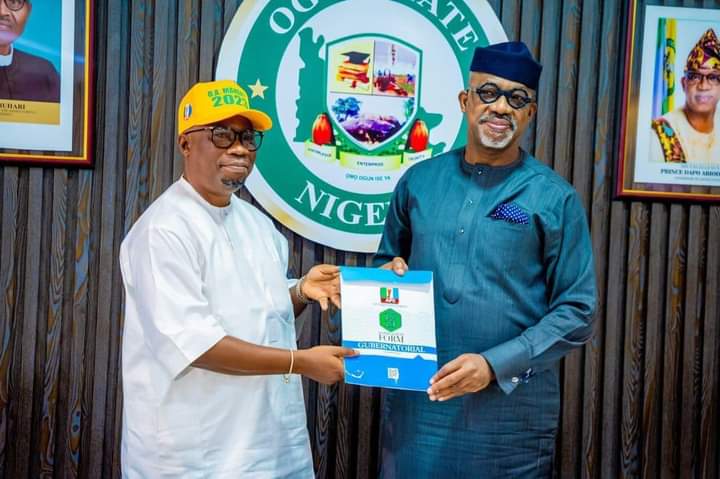 Ogun State Governor, Dapo Abiodun, on Thursday, officially declared his intention to seek re-election in 2023 on the platform of All Progressives Congress (APC), saying he remains undaunted and resolutely committed to achieve more for the state.

Abiodun made the declaration at the Executive Council Chambers of his office at Oke-Mosan Abeokuta, when he received the nomination form bought for him by his kinsmen and women under the aegis of the DA Mandate 2023.

He also immediately announced the re-nomination of his deputy, Engr. (Mrs.) Noimot Salako-Oyedele as his running mate.

Abiodun recalled how the journey began four years ago when he called out the citizens of the State to join him in a journey of selfless service to build a secure and prosperous state driven by a vibrant economy and supported by quality service, equity and justice, saying it was gratifying that the people believed in him and gave their support.

The governor who expressed surprise at the gesture, recounted the many trials he and his team had to pass through in the quest to lead the State, adding that some people did everything to discourage him while “many people did not believe in us”.

“This gesture touches my bone. It is like a balm that sooth all the pain that we suffered in the course of our campaigns. I am happy particularly that this is coming from my home base,” he said.

“We were planning on how to go to Abuja to get the form. I am happy that nobody prompted you, you did this out of your own volition and the belief you have in us. I promise you that the trust you have in us will be built upon.

“Today is a significant day in my life and because of this gesture, I am officially declaring my intention to run for the second term and in the same vein, I am declaring my deputy as my running mate. You are investing in an administration and I want to assure you that you will not regret, as the only way I can reward you is by more superlative performance”, he enthused.

He said his administration has made significant impact in the lives of the people, noting that the gesture would inspire him to do more.

According to the governor, “In the last three years, I have fulfilled my promises to you to make Ogun work for all. With your support, we have made this (Ogun) State a better place and changed the face of our State. I did not do it alone; we did it together, because you believed.

More Infrastructural Projects Will Be Recorded In 2022 – Dapo Abiodun

Ogun State governor, Dapo Abiodun, on Saturday said the state would witness the completion of projects

“Our state has remained steadily prosperous because of your positive outlook. I urge you to always stay positive in your personal and communal lives and continue to aspire to great things”.

He congratulated the executive members and all other members of his team who have worked tirelessly in the last three years, noting that “they are the stars of this administration”.

Speaking earlier, the Special Adviser to the Governor on Political Matters and leader of the group, Biyi Adeleye said the performance of the governor and the desire to see him complete his good works, led to the purchase of the form.

Adeleye who debunked insinuations that the governor does not have a platform, said the aim of the group is for second term and beyond, explaining that members of the group are from the three Local Government Areas of Sagamu, Ikenne and Remo North that make up the Remo Zone.

“We taxed ourselves to raise the fund for the form as a result of the confidence we have in the capacity of our brother and boss, Prince Dapo Abiodun, to lead the State to greater heights”, he added.

While calling on the people of the state to continue supporting the present administration, Adeleye informed that people from other zones have indicated interest to join the group.