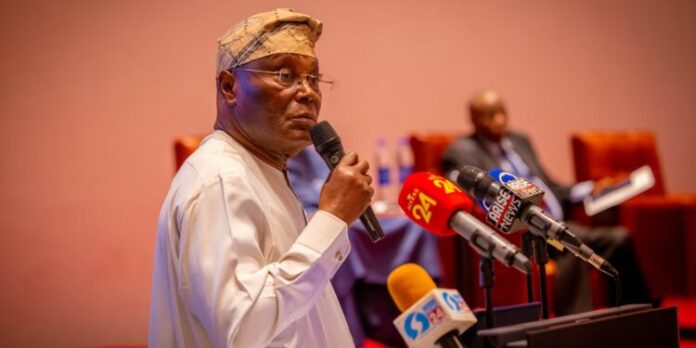 Former Minister of Education, Oby Ezekwesili has written off the candidate of the Peoples Democratic Party in the forthcoming Presidential Election, Alhaji Atiku Abubakar, saying he had nothing to offer Nigerians.

Ezekwesili stated this while reacting to the political development in the country.

She alleged that Atiku was only interested in becoming president to satisfy inordinate ambition and for selfish interest.

Part of her statement read, “I just laugh when I hear some people say our citizens movement will split opposition votes. But the PDP is not in opposition to the APC. The candidate of the PDP has over the past 14 years gone from PDP to AC, AC to PDP, PDP to APC and now back to PDP.

“For these terrible Nigerian politicians, corruption is all fun and games. These 7 people have no desire but for more power, power, power, power. They stay up at night conspiring to steal and pillage, to loot and destroy.

“Six and a half years after, I had fought the fight that had to be fought from within, and then I left government knowing for sure that if this political order is not changed, the work of good governance that we do within government will never last.

“I decided not to re-enter government, rebuffing every request made since, and instead made a decision to dedicate my life to activating citizens to push these blood-sucking political class out of office.

“I returned from the World Bank five years later to do just that, and the PDP was still at it! Same incentives, same behavior. The political class was completely unchanged – and had in fact become completely worse.

“For goodness sake, what has fundamentally changed about that PDP we have always known? What lessons did the party really learn after its defeat in 2015?

“Is this not the same PDP that looted the monies meant to equip our military, so that our soldiers had to run away at the sight of Boko Haram, because they had no weapons?

“The same PDP that spent precious days denying that our Chibok girls were kidnapped and so allowed the terrorists get away?

“Is this not the same PDP that conducted a recruitment exercise for the Immigration Service that killed scores of our young people and yet nobody was sacked or punished? Haba. How can we forget so easily!

“So the question is: Apart from forgetfulness, why are some Nigerians suddenly considering the PDP yet again?

“I have heard some people say it is because the PDP candidate has run successful businesses and therefore will be good for the economy at a time like this.

“That response just makes me shake my head in wonderment: Is it the same person we know, or are we speaking of another? Perhaps you never read a 2005 email from the president of Atiku’s university which was obtained by US investigators.

“Did you just hear what that email said? That the success of that man’s private business is dependent on our commonwealth?

“A special report by a US Senate Committee on Foreign Corruption concluded that “over an eight-year period from 2000 to 2008, Atiku and his wife, Jennifer Douglas were able to bring over $40 million in suspect funds into the United States…”

“And these are the people you want to put in charge of the national treasury? In charge of the money for your children’s education? Of the resources for our country’s hospitals? Of the budget for our depleted army and our impoverished police force?

“If we dive into all the filthy issues involving the PDP candidate – from PTDF saga to $2.8 million Siemens bribery scandal – we may spend the entire day here today and I simply do not have that time