Why Mariupol matters to Russia in three maps 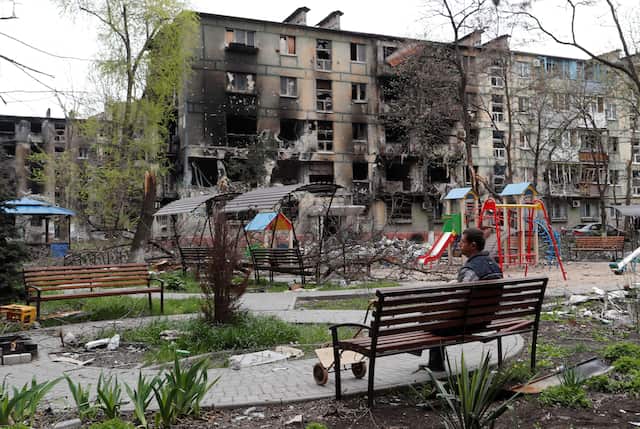 Russia declared victory in Mariupol on Thursday, even though a bastion of Ukrainian resistance remains in the Azovstal Iron and Steel Works plant, where hundreds of Ukrainian fighters and civilians are holed up.

Putin wants to show off a major win before Russia’s Victory Day on May 9, analysts said. A total defeat of Mariupol would give Russia a land bridge in eastern Ukraine, a key port and a propaganda win after two months of setbacks in its assault on Ukraine.

Capturing Mariupol would connect mainland Russia to Crimea, the peninsula it annexed from Ukraine in 2014. This could help link its forces in Crimea to Russian-backed separatists in eastern Ukraine.

Taking Mariupol would free up Russian troops who could be sent to the Donbas region, now the focus of Moscow’s offensive, Tracey German, a Russian security policy expert at King’s College London, said in an email.

The city provides a “highway going north” that would enable Russian soldiers advancing from Mariupol to join with units moving down from the Kharkiv region to encircle Ukrainian forces, said Samuel Charap, senior political scientist at the Rand Corp.

“For the Russians, it’s geographically important for a land bridge to get to Crimea,” Pentagon press secretary John Kirby told MSNBC on Monday. “And if, in fact, their goal is to cut off the Donbas region and to fix Ukrainian forces there so that they can’t be used elsewhere in the country to defend themselves, then you can see the logic of trying to take Mariupol.”

2. A devastated and symbolic battleground:

Russian troops surrounded Mariupol early in the war, and many residents fled. An estimated 120,000 civilians, roughly a quarter of the prewar population, remain in the city. Russian attacks on a maternity hospital, a theater and an art school sheltering civilians drew international condemnation and accusations of war crimes.

The Russian military cut off food, electricity and medical supplies. Even with communication lines down, harrowing tales of hunger and desperation have emerged.

Russians are poised to take control of the city, as Ukrainians hold the Azovstal steel plant, where hundreds of civilians are gathered.

Three weeks into the siege, Ukrainian forces — including the controversial Azov Battalion — faltered, and Russian forces surged deeper into the city. By the start of this week, it was clear that Ukrainian fighters were making their last stand at the steel plant, where a commander told The Washington Post his soldiers were “dying underground.”

For both Ukraine and Russia, Mariupol holds symbolic significance. Ukrainian troops and forces backed by Moscow have vied for control of the city before. In 2014, after war broke out over eastern Ukraine, Russian-backed separatists took Mariupol briefly before Kyiv’s troops won it back that June.

A Russian victory would make Mariupol the first major Ukrainian city to fall since the February invasion, delivering Putin a propaganda boost. But Mariupol is also notable for how long Ukrainian forces were able to defend it, Charap said.

Mariupol is the largest trading port on the Sea of Azov and a critical export hub for steel and grain. Its seizure gives Russia control of the Ukrainian coast on that sea, crippling maritime trade that is “vital for the Ukrainian economy,” German said.

For Moscow, controlling a port of this scale would make maritime transport between Russia, Donbas and Crimea easier, according to open-source intelligence agency Janes.

Mariupol also has a profitable metal industry. Azovstal and a nearby steelworks owned by the same company accounted for roughly a third of Ukraine’s steel production in 2019. Steel and related industries made up 12 percent of Ukraine’s gross domestic product that year.

Russian takeover has been devastating for civilians. Ukrainian authorities estimate that up to 20,000 have been killed, while Russian bombs have reduced vast swaths of the city to rubble. Hundreds of thousands of residents have fled.

“Before the Russians came we were beautiful. There were new businesses opening, new homes; we were starting to flourish,” one woman who fled Mariupol this week told The Post. “They destroyed everything.”