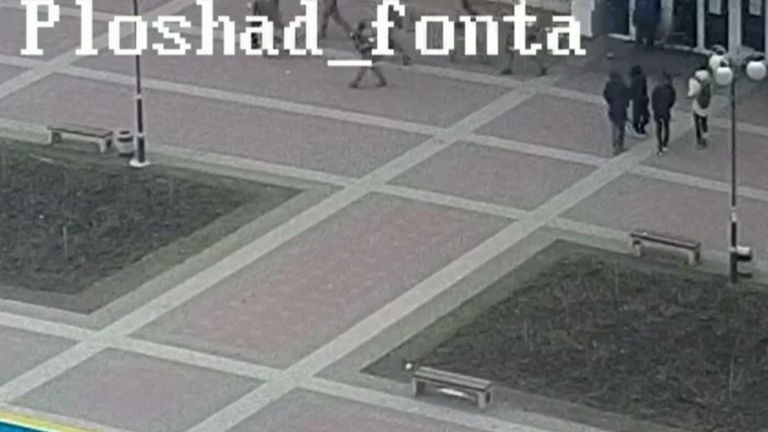 Ukraine’s Ministry of Foreign Affairs warns that the abduction of Melitopol mayor Ivan Fedorov amounts to a war crime, and says the perpetrators will be brought to justice.

The mayor of the Ukrainian city of Melitopol has been kidnapped by Russian forces, according to President Volodymyr Zelenskyy.

Ukraine’s parliament has claimed Ivan Fedorov was abducted by a group of 10 armed men who put a plastic bag over his head.

Footage posted on Telegram by the deputy head of Ukraine’s presidential office appears to show Mr Fedorov being escorted across a square in the city centre.

Ivan Fedorov is mayor of the southern port city of Melitopol. Pic: Ukraine.

Mr Zelenskyy equated the kidnapping to the actions of “IS terrorists”, and said Russian forces “have transitioned into a new stage of terror”.

The president warned: “They are trying to physically eliminate representatives of legitimate local Ukrainian authorities.”

Ukraine’s Ministry of Foreign Affairs has warned the abduction amounts to a war crime, and vowed that the perpetrators will be brought to justice.

“We call on the international community to respond immediately to the abduction of Ivan Fedorov and other civilians, and to increase pressure on Russia to end its barbaric war against the Ukrainian people,” its statement added.

The southern port city of Melitopol, which has a population of about 150,000 people, was captured by Russian forces on 26 February.

AfricanCamera has verified and located footage appearing to show Russian armoured vehicles and a Russian flag raised in Melitopol, Ukraine.

The prosecutor’s office of the Luhansk People’s Republic – a breakaway region of eastern Ukraine that is backed by Moscow – has accused Fedorov of “terrorist activities”.

Before the invasion began, US intelligence had warned that Russia was planning to detain and kill certain targets in Ukraine.

President Zelenskyy himself would likely be one of these targets.