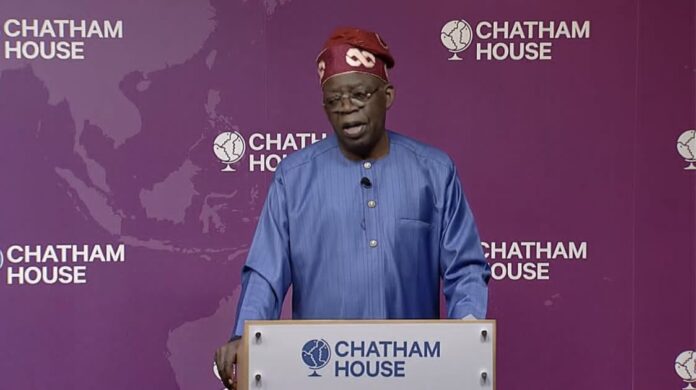 Presidential Candidate of the All Progressives Congress Asiwaju, Bola Ahmed Tinubu on Monday addressed Chatham House in London ahead of Nigeria’s presidential election in February next year.

Tinubu who has been addressing various strategic groups in Nigeria at town hall meetings, travelled to the United Kingdom weekend to share his campaign plans at Chatham House — a globally admired and respected platform for intellectual engagement on different issues of contemporary interest to people around the world.

It was the second time the APC candidate delivered a speech at the forum having first done it in 2011. He was accompanied to the event where he spoke on “Nigeria’s 2023 elections: Security and economic development and its foreign policy imperatives” by key party and campaign council leaders which include Governors Nasir El Rufai, Babajide Sanwo-Olu, Mohammed Abubakar Badaru, Speaker of House of Representatives, Femi Gbajabiamila, Deputy Director General of Campaign Council, Hadiza Bala Usman, former Governor Kayode Fayemi among others.

Tinubu in his speech, emphasised Nigeria’s role in Africa as a big brother and a beacon of hope to the continent and the ECOWAS sub-region through now entrenched democratic ideals, having run an unbroken democracy for over two decades.

He said when he becomes Nigeria’s president, his administration will continue to provide quality leadership to the sub-region, to ensure democratic ideals reign in nations of the ECOWAS region.

The APC Presidential candidate in his address vowed that as President, Nigeria will epitomise values of democracy during elections anywhere in Africa, by ensuring that democratic ideals are followed and all forms of electoral violence will be rejected, allowing only the will of the people to prevail.

“Every election, wherever it is held, is important to the people or entity directly concerned. It is also important to the global democracy community as well. Equally, there are also countries whose elections, on account of their weight and influence, carry wider implications way beyond their immediate geographical boundaries. Nigeria is one of such countries.

“I stand firmly against all forms of electoral violence and intimidation.  Having spent most of my career in the political opposition, I have long fought against electoral malpractice and any attempts to extinguish the legitimate choice of voters.  I will continue to do so.

“And I urge all my fellow contestants in this election to do the same.  Let the sovereign will of the people decide the path of our nation.  And let this election be determined by voters making their choice freely rather than the domineering intimidation of the troublesome few.

“For one, as Africa’s most populous country and the continent’s largest economy, it is generally acknowledged that the fortunes of the African continent and indeed the Black race is tied directly to the health of Nigeria.

“Also the Nigerian elections of 2023 are coming up at a time when the country’s immediate geographical neighbourhood of West and Central Africa is undergoing serious political turmoil that has manifested itself in the incursion of the military to power in a number of countries. In spite of the legitimate concerns being expressed by observers, Nigerians are resolutely committed to democracy, regardless of their political differences.

“This effectively means that the relationship between Nigeria and its immediate neighbours is much more than just a geographical expression.

“To be fully secure at home, Nigeria has always believed it must be the brothers’ keeper. It was out of this understanding that Africa’s premier regional economic community, ECOWAS, was established in 1975. Uniquely, ECOWAS had embedded in its mandate, the promotion of regional economic integration as a good in its own right and in addition undertook sub-regional peace and security.

“I am convinced, as I am sure most of us are, that the broad principles that enabled successive Nigerian governments to interface development and security, and establish an organic link between national security and economic development with regional peace and prosperity is both impeccable and remains relevant. It is an approach which I commit myself to upholding and advancing,” Tinubu said.

Tinubu promised to tackle the security situation heads on, so that Nigeria can also effectively provide security support for its neighbouring nations.

He noted, “The challenges which have manifested themselves with regard to our national and regional development and security trajectories are very well-known to all of us here: radical extremist violence, terrorism, banditry, kidnapping, human trafficking, trafficking in weapons, trafficking in drugs, climate change and resource driven conflicts etc. Mostly manifesting initially as national problems, these challenges evolved over time into trans-border and multinational challenges.

“We see the thousands of people who have been internally displaced at home or forced into refugee camps abroad. With farming activities disrupted, we have seen shortages of basic food items and food price inflation that are further undermining human security.

“To respond meaningfully to the discontents and to redress the many dislocations arising from them, we must begin by reminding ourselves of that old dictum: Foreign policy is but a continuation of domestic policy.

“As a first step, we must recalibrate domestic policy in order to revamp the foundation on which our quest to pursue human security rests.”

He also said the nation under his watch will place emphasis on the use of technology to improve the agricultural sector for better production and contribution to the nation’s economy.

“The present administration has invested heavily in agriculture, providing loans and expanding the country’s total acreage of cultivated land.  We will build on this, but our focus will be on using technology and expertise to accelerate growth and development by providing the critical infrastructure necessary to achieve the commodity transformations in the agriculture value chain.

“Roads, rail, access to ports, and storage infrastructure are what we require to radically transform the agriculture sector and increase its value to the nation. Providing these will be the areas of our focus so that the full potential of our agro economy can be achieved, and we can reap the benefits in jobs, improved economic opportunities and increased prosperity.

“Fixing the perennial riddle of energy supply is another priority.  There is no version of the world where Nigeria’s ambitions for itself can be achieved without solving the problem of how to provide energy to homes and businesses across the country.  It is time to recognise that the centralised approach to energy policy and infrastructure is not an optimal arrangement and is unlikely to improve by mere tinkering around the sides.

“The Federal government as regulator and operator, and price fixer is a broken model and one that we fully intend to fix if elected.

“We have privatised power distribution in Nigeria and generation to a certain degree.  What we need to do, going forward, is to improve the enabling environment and further reform the legal and regulatory framework to attract more private investments in the sector as we have experienced in the telecom industry.”
He promised to engage the private sector to better drive economic development across the country.

“My belief that the private sector is the fulcrum of economic progress is evident and documented.  However, fundamental flaws with the basic design of our national economy imperil the private sector from playing the role it ought to and adding the value it is capable of.  In this instance, the government must act as a catalyst.  We shall do this on all fronts.  We will address the conflict between monetary and fiscal policies.  Budgeting will be based on the projected spending levels needed to push real annual growth rate above 7 per cent while reducing the unemployment rate so that we can double the economy in ten years.”