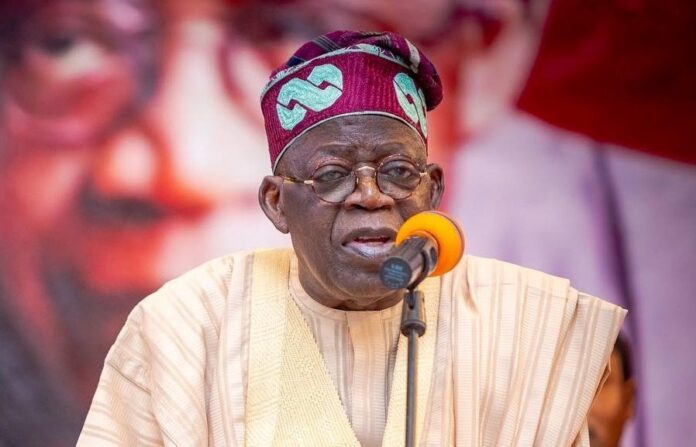 All Progressives Congress Presidential Candidate, Asiwaju Bola Ahmed Tinubu, has called on Nigerians not to allow the Peoples Democratic Party anywhere near the Nigeria’s commonwealth again because of the destruction the party wrought on the country.

Tinubu made the call on Saturday in Lagos at the Teslim Balogun Stadium, Surulere venue of APC Presidential Campaign’s mega rally where he also recalled how Lagos gave him a chance to deploy his talents for national progress and preservation of progressive politics.

“I thank the Almighty Allah and the good people of Lagos State for a place to stand, from which I could deploy my talents to mobilise like-minded Progressives to defend this great city.”

The APC Presidential candidate said his party’s campaign is a broom revolution, and invoking the spirit of his late mother, Alhaja Abibatu Mogaji, the Iyaloja-General, he followed up with a folksong, singing in Yoruba, “Dagunro o se je, Tinubu o se pa,” meaning literally that he can not be killed.

Tinubu said he would continue with progressive government where Nigerians will not be forgotten in education, healthcare and employment generation.

The former Lagos State governor who spoke partly in Yoruba took a swipe at the Peoples Democratic Party Presidential Candidate bAtiku Abubakar, describing him a veteran aspirant who should go home and rest.

“Atiku contested in SDP, he contested in PDP; he contested in ACN when we rescued him from Obasanjo. Now he is contesting again in PDP. He should go home and rest,” adding that Nigerians should never allow him and his party near the country’s commonwealth.

“Atiku has been running. Use your PVC to vote him and his party out. Use your votes to retire him permanently this time. We must never again allow the rapacious and visionless gang of Peoples Destroying People to come near our commonwealth again. They were in government for 16 years, they didn’t remember Badagry Expressway, they didn’t remember East-West Road, they didnt remember 2nd Niger Bridge.”

To underscore his support across the country, Tinubu noted that Governors of Kano, Kastina, Kaduna, Kwara, Kebbi and other APC Governors were with him unlike his opponent who could not hold his party together.

Tinubu again used the opportunity of the rally to thank President Muhammadu Buhari for his commitment to the development of Nigeria and Lagos State.

“I specially thank President Muhammadu Buhari for the unprecedented Federal support and commitment to Lagos State. We have come a long way from Presidents whose sole obsession was to capture or conquer Lagos in do-or-die fashion, to a President who loves the state greatly and is keen to see it do very well.

“Lagos has benefited tremendously in terms of infrastructure development, whether it is the Lagos-Ibadan Railway line, or the Apapa-Oshodi-Oworonsoki Expressway, the revamped National Theatre, the new International Airport Terminal or the support that has made the Lekki Deep Sea Port possible and the Dangote Refinery and Petrochemical Plant, as well as the Red Line of the Lagos Metro, which is sharing part of the Federal corridor,” he said.

Addressing the massive rally on the importance of sustaining the progressive governance in Lagos State, Tinubu urged Lagosians to vote for Governor Babajide Sanwo-olu and his deputy, Dr. Obafemi Hamzat, for second term.

“Dear Lagosians, my appeal to you today, is to ask you to renew the mandate of Babajide Sanwo-Olu and Kadiri Obafemi Hamzat for another 4 years. Do not let the execution and implementation of the bold vision of more than two decades be aborted or suspended.”

For the stability of Lagos State, Asiwaju Tinubu called on the youths and students to vote for Sanwo-Olu and Hamzat.

“The lives of over 22 million people are too important to be subjected to tragic experiments in the hands of kindergarten politicians. Babajide Sanwo-olu and Obafemi Hamzat have been schooled in the finest tradition of people-management and development planning.”

There were also members of the APC National Working Committee, National Assembly members and Ministers.

Welcoming the dignitaries and people of Lagos, Governor Sanwo-olu thanked Asíwájú for the foundation he laid in the state and the legacies he left behind as governor, saying he is the right man for the presidency in 2023.

Governor Bagudu who spoke on behalf of the 22 APC Governors thanked the Lagos governor for the successful rally.

“Our party leadership and governors believe in Asíwájú and for the right reasons. The world economy has been challenged, Nigeria inclusive. We need someone of Asíwájú’s standing and pedigree to take over to help the country wade through,” he said.

Speaker Gbajabiamila commended Asíwájú for his investment in human capacity, saying he has developed more people than any others.

“There is a lot to be said about Asíwájú. He is the most investigated Nigerian and nothing has been found against him. ”

The DG of the campaigns, Hon. Lalong said Asíwájú Tinubu has the character and capacity to lead Nigeria and ensure equity and justice to all parts of the country, adding that with Asíwájú and Shettima, Nigerians would have no cause to regret.