Poland’s most beautiful towns: 10 smaller spots to add to your travel wish list 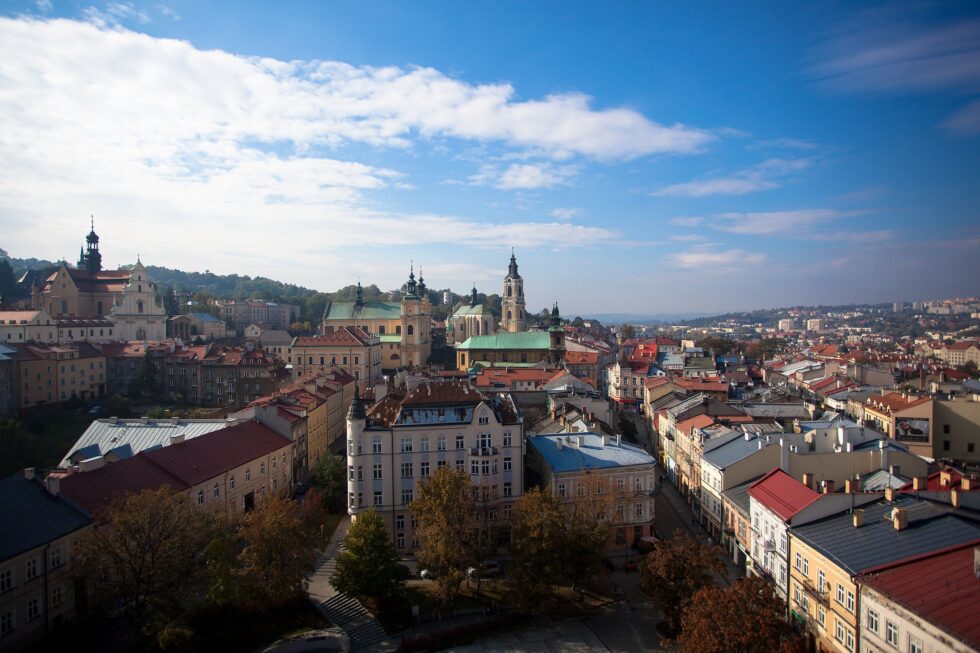 This article is illustrated with photographs by Jerzy Ochoński. More images from villages and towns around Poland are available on his website.

A recent selection of Europe’s most beautiful towns by CNN Travel surprised many in Poland by singling out Tarnów as its Polish pick. “This is a city,” the author admitted. “But wander the Old Town and you’ll find it still has that small-town feel, with pretty medieval buildings that give a feel of how nearby Krakow was before mass tourism arrived.”

While Tarnów is certainly worth a visit, Poland offers many other beautiful and interesting small towns off the beaten path that are a treasure-trove of culture, history, and breathtaking sights. Here is a selection of ten of them, each with populations of around 65,000 or fewer.

Sandomierz played a key role in Polish history and was an important medieval urban centre. Its location near the confluence of the Vistula and San rivers made it attractive from a trade and commerce perspective, and the town was particularly prosperous prior to the Mongol invasions in the late 13th century.

Having escaped extensive damage through the course of the world wars, Sandomierz is associated today with its charming and well-preserved old town, which has become particularly well known in Poland as the setting for Ojciec Mateusz (Father Matthew), a drama series about a crime-solving, bicycle-riding priest.

The old town square is worth lingering in, lined with original buildings with the beautiful town hall at centre stage. There is also an underground tourist route. Follow the cobblestone streets south to find Sandomierz Castle overlooking the Vistula River. Not only does it offer excellent views of the surrounding area, it also houses a museum that features exhibits related to local art and history.

On Poland’s northern Baltic Sea coast, you can find the town of Kołobrzeg, a name that translates as something like “by the shore”. Long a popular resort town, the expansive sandy beach is dotted with attractions, including a bustling boulevard and many easily accessible bike paths.

If you’d like a better view with a dash of local history, climb the Kołobrzeg Lighthouse, which offers a bird’s eye view of the sea as well as the pier and several historical buildings in the harbour.

Visitors to Kołobrzeg, which was historically part of the Hanseatic league and maintains close ties to other cities and towns along the Baltic and North Seas, can also take a boat trip to Bornholm Island, which is part of Denmark.

Zamość, in Poland’s southeast, is best known for its immaculate old town, classified as a UNESCO world heritage site, with a stunning, 100 x 100 metre market square.

Known as a prime example of a 16th-century renaissance town, Zamość’s original construction was completed with the help of the Italian architect Bernardo Morando, who modelled his plans on Italian theories of the “ideal city”.

Just outside the centre of the town, you can also take a look at the Zamość Fortress, a series of fortifications encircling the town that were able to withstand the forces of the Cossacks as well as survive the Swedish Deluge. At the time they were built, they were among the largest of the fortifications in the Polish-Lithuanian Commonwealth.

Located on the Olza river along Poland’s border with the Czech Republic, Cieszyn was historically the capital of the Duchy of Teschen. Ruled first by the Polish Piast dynasty and later by the Habsburg Dynasty of Austria, Cieszyn has long been characterised by its blend of regional cultures.

In 1920, the town was split in two between Poland and Czechoslovakia. Today (Covid restrictions notwithstanding) you can cross the Friendship Bridge (pictured below), where Poles and Czechs celebrated together as they both entered the European Union and the Schengen Area, enabling them to freely move from country to country.

Cieszyn also offers the opportunity for plenty of outdoor activities such as hiking and skiing in the Silesian Beskids mountains. If food and drink are more your speed, you can eat a Prince Polo chocolate bar where it was originally produced, or visit the longest continuously operating brewery in Poland.

At the other end of the country lies Hel, a village located at the tip of a narrow sandy peninsula jutting into the Gdańsk Bay whose diabolical name has led to many jokes.

Besides featuring some of the best sandy beaches in Poland along the Baltic Sea, its location has also made Hel strategically important both economically and militarily throughout the ages.

During the Second World War, the Hel peninsula was one of the longest-defended areas by the Polish Army, with around 3,000 soldiers from the Coastal Defence Group managing to continue fighting until early October 1939.

Today, the harbour is thankfully used more for yachts and fishing boats, with regularly scheduled ferry routes to the Tri-City area of Sopot, Gdynia, and Gdańsk in the summertime.

Due to its proximity to the sea, Hel also has great options for those interested in diving or in the local wildlife. There is a seal sanctuary (the Fokarium) and a fishing museum that’s affiliated with the larger National Maritime Museum in Gdańsk.

It’s got so cold in Poland that even the seals’ whiskers at the aquarium in Hel, a town on the Baltic coast, have turned into icicles.

Nestled on a hill overlooking the Vistula River, Kazimierz Dolny is a popular resort that is first on many people’s list when asked to name Poland’s most beautiful town. It flourished during the 16th and 17th centuries and features many well-preserved buildings and old town squares from this period.

Kazimierz has attracted the Polish upper crust for centuries, with painters, writers, and other artists leaving behind a rich legacy. It was also formerly a centre of Jewish life, with Jews accounting for half of its interwar population. Visitors wandering around the town today will also see craftsmen set up stands featuring their wares including stained glass and folk art in public squares.

The natural features of the area around Kazimierz Dolny also provide many opportunities for discovery. The region is referred to as the Lesser Poland Gorge of the Vistula and it contains many hills and ravines to explore.

The village of Lanckorona lies southwest of Kraków in southern Poland. Its eponymously named ruined castle was originally constructed to protect the road leading to the former royal capital. It was the site of several intense battles in the 17th and 18th centuries, first damaged during the Swedish Deluge and later in the Battle of the Bar Confederation attempting to fight off Russian influence and power over the Polish-Lithuanian Commonwealth.

The castle ruins are also associated with a UNESCO World Heritage site: the Mannerist Architectural and Park Landscape Complex and Pilgrimage Park, which is brim-full of gorgeous chapels, churches, and a monastery, set into the rolling hills.

Today Lanckorona is also well-known for its array of well-preserved wooden houses in the centre of the village that date back to the 19th century. You can check out their ethnographic museum, located in one such wooden house, to get a glimpse of what everyday life was like for the village’s inhabitants in the 1800s.

Mikołajki lies in the heart of the Masurian Lake District, a region in northeastern Poland with over 2,000 lakes, interconnected with canals and waterways. The area is particularly well-loved by locals in the summer, due to the many options for leisure: everything from spa resorts and “glamping” in the woods to water sports and hiking trails.

The largest lake in Poland, Śniardwy, can be found nearby. In summer, it is filled with the small sailboats, while winter brings opportunities for ice skating or cross-country skiing as well as the popular tradition of “ice boats” on the lake – small sailboats fitted with skating blades so they can glide across the surface.

The village of Mikołajki is itself a picture-perfect resort town, with a lovely lakeside promenade lined with cafes and restaurants that have views of the harbour. There’s also an observation tower in the Church of St Nicholas that offers panoramic views of the village and surrounding lakes.

In southeastern Poland in the foothills of the Carpathian Mountains and close to today’s border with Ukraine, the historical town of Przemyśl abounds with cultural and architectural gems. The Tatar Mound is thought to have been used as a place of worship for the old Slavic gods; today it offers breathtaking views of the surrounding town and countryside.

If you’re interested in castles and fortifications, Przemyśl also has a lot to offer: old forts and 19th- century defensive buildings pepper the surrounding hills, while Casimir Castle is adjacent to the historic old town. The centre itself is full of beautiful churches and classic buildings that house several whimsical museums such as the Museum of Bells and Pipes, the Museum of the Przemyśl Fortress, or the local branch of the National Museum.

In southwestern Poland not far from the Sudety Mountains, Świdnica’s location resulted in a blend of German and Polish culture, and traces of German influence can still be found.

A Lutheran church in the town, the Holy Trinity Church of Peace, was officially recognised by UNESCO as a world heritage site, along with another church in nearby Jawór. It is the largest wooden baroque temple in Europe, with a classic half-timbered design.

The town square is also well-preserved and features some interesting museums, such as the Museum of Old Trade, dedicated to the history of trade in Silesia.