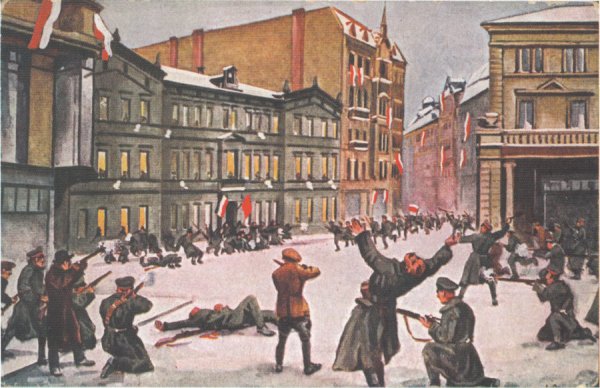 Poland has created a new national holiday to celebrate a successful insurrection against German rule. The uprising took place in the wake of World War One, as Poland sought to re-establish itself as an independent state following over a century of partition between Germany, Russia and Austria.

The new “National Day of the Victorious Greater Poland Uprising” was signed into law by President Andrzej Duda yesterday and will take place annually on 27 December.

On that date in 1918, the uprising broke out in the Greater Poland region, which had been under German rule. By mid-January 1919, Polish forces had taken control of most of the province and in June it was recognised as part of the newly independent Poland in the Treaty of Versailles.

There were 2,261 fatalities in the uprising, according to Poland’s state Institute of National Remembrance (IPN).

The new holiday has been declared to pay “tribute to the heroes who liberated Greater Poland from German rule and incorporated it into the reborn Republic of Poland”, reads the preamble to legislation adopted by parliament in October. It received unanimous support in the Senate, notes the Polish Press Agency (PAP).

The bill was signed by Duda in Poznań, the capital of Greater Poland and the city where the insurrection began. Earlier in the day, Duda laid flowers at the grave of General Stanisław Taczak, who commanded the Polish forces in the uprising.

The building in which he signed the document was formerly a hotel at which Ignacy Jan Paderewski – a musician who became one of the founding fathers of independent Poland and its first prime minister – delivered a speech that is regarded as one of the triggers for the uprising.

The president yesterday described Greater Poland as the cradle of Polish statehood. It was there, in the city of Gniezno, that the first Polish state emerged in the tenth century. The region then played an integral role in helping Poland regain independence in the twentieth century, he noted.

The new state holiday will not, however, be a day off work. “It would be difficult to push through another day off work,” said Duda in September, adding that, in any case, the “hardworking and organised” people of Greater Poland would not want one.

“The idea of ​​the holiday is to promote patriotism, teach history, especially in its best periods, so I believe that a day off would be the last thing that the initiators of the action of establishing 27 December as a holiday would want,” he told Głos Wielkopolski.

Calls for the holiday to be created were first made in June this year by a group of museums and community associations in Greater Poland, as well as the local branch of the IPN. In September, Duda promised he would “do everything in my power” to introduce the holiday this year.

Poland’s ethnic German minority has criticised a new monument commemorating Poles who died fighting in the Silesian Uprising of 1921, which sought for the region to be transferred from Germany to Poland.

They want fighters on both sides to be honoured