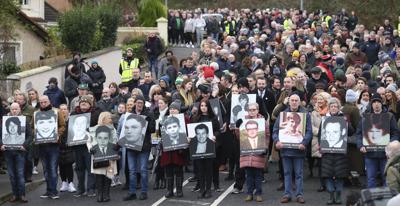 People take part in a march to commemorate the 50th anniversary of the ‘Bloody Sunday’ shootings with the photographs of some of the victims in Londonderry, Sunday, Jan. 30, 2022.

In 1972 British soldiers shot 28 unarmed civilians at a civil rights march, killing 13 on what is known as Bloody Sunday or the Bogside Massacre. Sunday marks the 50th anniversary of the shootings in the Bogside area of Londonderry.

Relatives of those killed and injured on Bloody Sunday marched in Northern Ireland to mark 50 years since one of the deadliest days in the conflict known as The Troubles.

Thirteen people were killed and 15 others injured when British soldiers fired on civil rights protesters on Jan. 30, 1972, in the city of Derry, also known as Londonderry.

Hundreds made their way Sunday to the Bloody Sunday Monument for the annual memorial service and wreath-laying ceremony.

Britain’s government apologized in 2010 after an official inquiry found that the soldiers fired without justification on unarmed, fleeing civilians and then lied about it for decades. The report refuted an initial investigation that took place soon after the slayings that said the soldiers had been defending themselves against Irish Republican Army bombers and gunmen.

One former British soldier was charged in 2019 in the killing of two of the protesters and the injury of four others.

Prime Minister Boris Johnson told Parliament on Wednesday that Bloody Sunday was “one of the darkest days in our history” and that the country “must learn from the past.”