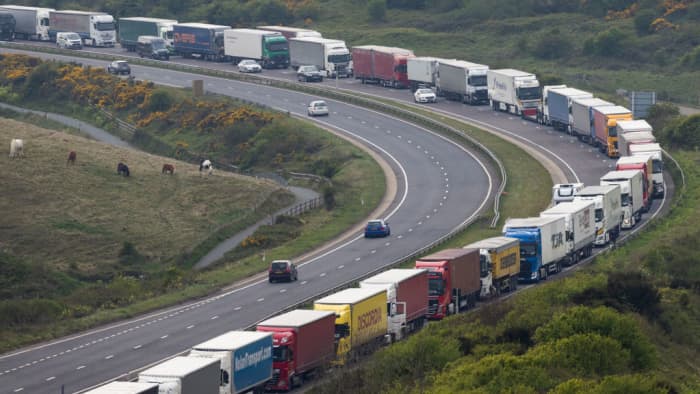 British consumers would feel the immediate effects of an EU retaliation if Boris Johnson unilaterally scrapped parts of the Northern Ireland protocol, experts have warned.

Sinn Fein’s historic victory in the Stormont elections at the weekend has brought the Brexit deal back into sharp focus, with the ousted DUP refusing to join the power-sharing coalition until checks on goods entering Northern Ireland from Great Britain are removed.

The protocol, which is supported by Sinn Fein, was negotiated in 2019 to prevent a hard border with Ireland, a move that would risk inflaming sectarian violence.

The DUP believes the deal undermines Northern Ireland’s position in the UK, and their refusal to join the ruling executive as the second-largest party is viewed by analysts as an attempt to strongarm Downing Street into ripping up the protocol.

But academics have cautioned that unilateral action could spark a trade war at a time when British businesses and shoppers are facing rising cost of living pressures.

“If the EU uses one of its more significant means of responding, it would be felt very quickly by British consumers,” she told Upday.

“For example, it could introduce a very slow or rigorous inspection of every single vehicle bringing goods into the EU or paperwork to do so. That creates hold-ups in Britain and, ultimately, a slowing down of production.”

The EU on Monday said Johnson should “dial down the rhetoric” and the Irish government urged the British side to show flexibility to make the Brexit deal work.

Maros Sefcovic, the European Commission vice-president, told Politico that Brussels has “absolutely no interest in interfering in the UK’s internal affairs” but that the UK “should show genuine determination and good faith to make the protocol work, rather than looking for ways to erode it.”

Hayward argued that Britain’s response to Vladimir Putin’s invasion of Ukraine could be undermined if it was found to have broken international law by overriding the deal.

“The UK’s duty in response to the invasion of Ukraine has been around Russia’s breach of international law,” she said.

A hint to what course of action Downing Street chooses to pursue — continuing negotiations with the EU or scrapping the protocol — could be provided in the Queen’s speech on Tuesday.

David Phinnemore, professor of European politics at Queen’s University Belfast, said the wording in the Queen’s speech was expected to be deliberately vague.

“That would then give them some cover further down the road if they want to take bolder action, but the indications are that we’re not going to see that,” he told Upday.

“If (Johnson) does take bold action, we’re going to see a response on the part of the EU and any attempt that the UK government might be making to secure concessions on the Northern Ireland protocol will probably be quite seriously undermined.

“Why jeopardise the opportunity for further engagement with the EU by taking action hastily that’s going to upset the EU and possibly provoke retaliatory action?”

Speaking on Monday, DUP leader Sir Jeffrey Donaldson said on Monday that the protocol was casting a “long shadow” over politics in the region.

“The people who can deliver the change are Boris Johnson and the government,” he said.

“Frankly the sooner they do it, the sooner we can get things properly functioning again here at Stormont.”

But Johnston said he does not plan to be personally involved in the Northern Ireland talks and Downing Street played down reports of a cabinet rift over the protocol.

Michelle Donelan, the universities minister, insisted that the government was still considering scrapping the protocol.

“We’re negotiating with the EU to find a solution, as we’ve said nothing is off the table here. If we need to, we will trigger Article 16, but we want to try and negotiate as our first priority,” she told Sky News.

Asked about scrapping the protocol, she said: “That is on the table as one of the options.”