European Radio To Play ‘Give Peace A Chance’ For Ukraine 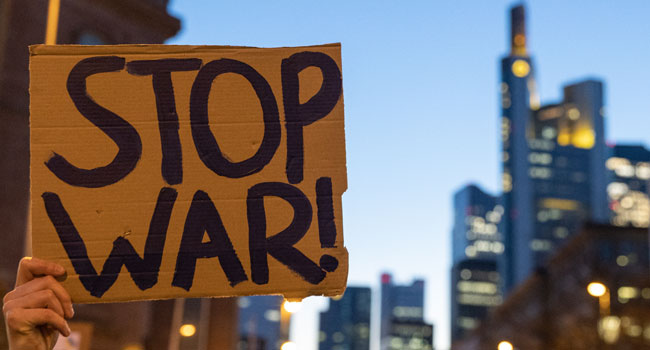 Around 150 public radio channels across Europe will play “Give Peace a Chance” at 07:45 GMT on Friday in solidarity against the war in Ukraine, the European Broadcasting Union announced.

The track, penned by John Lennon, will be heard in more than 25 countries including Ukraine, while European commercial radio stations will also join in the moment, the EBU said.

“This powerful call for peace through an iconic song will resonate with millions of listeners,” said EBU director general Noel Curran.

“The horrors of the war against Ukraine are more apparent every day. Our solidarity, our humanity and our support are needed,” said RBB chief Patricia Schlesinger.

“It is a good signal seeing Europe’s radio stations join forces to remind us of that with this song.

“It is a source of strength and urges us not to look the other way.”

The United Nations has opened a probe into alleged war crimes, as the Russian military bombards cities with shells and missiles, forcing civilians to cower in basements, more than a week into the full-scale invasion.

Speaking on behalf of Ukrainian Radio, Yurii Tabachenko said: “It is extremely important that today Europe is united around Ukraine.”

“Give Peace a Chance”, released in 1969 by the Plastic Ono Band, was recorded in Montreal during Lennon and his wife Yoko Ono’s “bed-in” for peace at the Queen Elizabeth Hotel.

Founded in 1950, the Geneva-based EBU is the world’s biggest public service media alliance. It has 113 member organisations in 56 countries, plus 31 associates elsewhere around the globe.