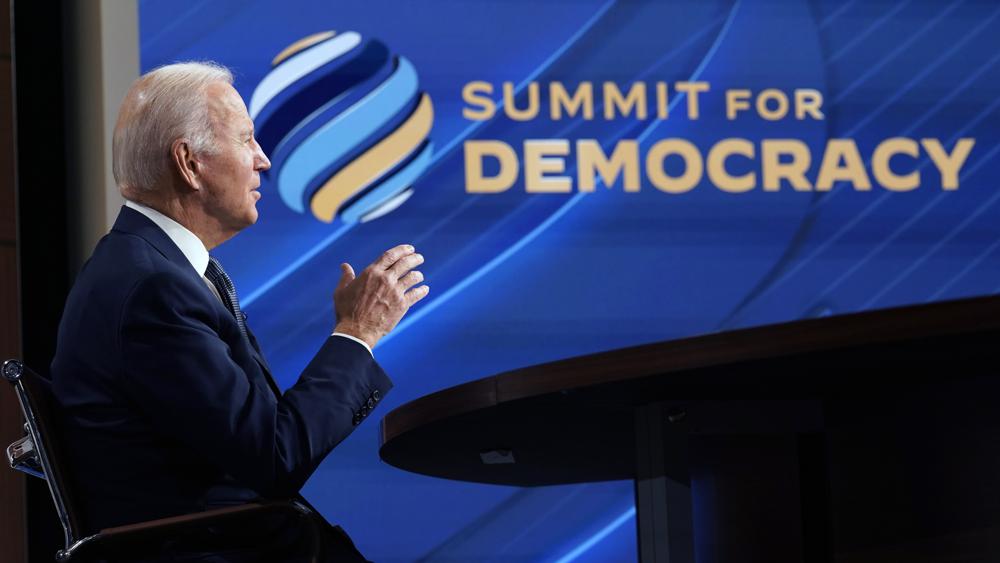 President Joe Biden speaks as he meets virtually with Chinese President Xi Jinping from the Roosevelt Room of the White House in Washington, Nov. 15, 2021. Biden is ready to urge participants at the first-ever White House Summit for Democracy to reverse an ongoing “recession” of democracy that is playing out a time of rising authoritarianism around the globe and extraordinary strains on foundational institutions in the U.S. (AP Photo/Susan Walsh, File)

Biden called it a critical moment for fellow leaders to redouble efforts on bolstering democracies. In making the case for action, he noted his own battle to win passage of voting rights legislation at home and alluded to the United States’ own challenges to its democratic institutions and traditions.

“This is an urgent matter,” Biden said in remarks to open the two-day virtual summit. “The data we’re seeing is largely pointing in the wrong direction.”

The video gathering, something that Biden had called a priority for the first-year of his presidency, comes as he’s repeatedly made a case that the U.S. and like-minded allies need to show the world that democracies are a far better vehicle for societies than autocracies.

The premise is a central tenet of Biden’s foreign policy outlook — one that he vowed would be more outward looking than his predecessor Donald Trump’s “America First approach.

The summit was billed by the White House as an opportunity for leaders and experts from some 110 countries to collaborate on defending against authoritarianism, fighting corruption and promoting respect for human rights. But the gathering already has drawn backlash from the United States’ chief adversaries and other nations that were not invited to participate.

Ahead of the summit, the ambassadors to the U.S. from China and Russia wrote a joint essay in the National Interest policy journal describing the Biden administration as exhibiting a “Cold-War mentality” that will “stoke up ideological confrontation and a rift in the world.” The administration has also faced scrutiny over how it went about deciding which countries to invite.

Biden told the virtual gathering this is a moment when a profound diminishment of freedoms is trending around the globe, calling it “the challenge of our time.”

Local elected officials are resigning at an alarming rate amid confrontations with angry voices at school board meetings, elections offices and town halls. States are passing laws to limit access to the ballot, making it more difficult for Americans to vote. And the Jan. 6 attack at the Capitol has left many in Donald Trump’s Republican party clinging to his false claims of a stolen election, eroding trust in the accuracy of the vote.

Biden has said passage of his ambitious domestic agenda — the $1 trillion bipartisan infrastructure bill he signed into law, as well as the roughly $2 trillion “Build Back Better Act” of social and climate change initiatives moving through the Senate — will demonstrate how democracy can improve people’s lives.

Some advocates also want Biden to focus on other ways to shore up democracy at home. One early test will come Thursday as the House moves to approve the Protecting Our Democracy Act, the third in a trio of bills — alongside the Freedom to Vote Act and the John Lewis Voting Rights Act — largely backed by Democrats in Congress but stalled by Republicans in the Senate.

“The United States has a thriving democracy, but it’s been hurting in recent years,” said Michael Abramowitz, the president of Freedom House, whose annual report marked a 15th consecutive year of a global democratic slide. “Right now, we’re going through a phase in America where it’s very difficult to get things done and to really prove that democracy can deliver.”

In its new annual report released Wednesday, CIVICUS Monitor, a global rights index, said 13 countries saw their civic freedoms downgraded in 2021 from the previous year. Only one, Mongolia, saw civic freedoms improve, according to the report. Of the 197 countries graded by the group, only 39 were rated as open societies.

A Pew Research Center report released this week said that while “people like democracy, their commitment to it is often not very strong.” Even wealthy countries, including the U.S., have some people who favor military rule, the report said.

Another group, the International Institute for Democracy and Electoral Assistance, said in its annual report that the number of countries experiencing democratic backsliding “has never been as high” as the past decade, with the U.S. added to the list alongside India and Brazil.

Chinese officials have offered a stream of public criticism about the summit, with one senior government official even calling it a “joke.” They have also expressed outrage over the administration inviting Taiwan to take part in the gathering. China claims the self-governing island as part of its territory and objects to it having any contact on its own with foreign governments.

“The U.S. side claims that its so-called democracy summit is to defend democracy, then I can’t help asking with the most abundant and advanced medical resources and technology, how could the U.S. allow more than 800,000 of its people to die from the virus and leave nearly 50 million people suffering the COVID still?” China’s Foreign Ministry spokesperson Zhao Lijian said this week. “With such human rights tragedies, how can the U.S. defend democracy?”

Other uninvited countries have shown their displeasure. Hungary, the only European Union member not invited, tried to block EU Commission President Ursula von der Leyen from speaking on behalf of the bloc at the summit. During the 2020 campaign, Biden referred to Hungarian Prime Minister Viktor Orban as a “thug.”

The White House declined to say how it went about deciding who was invited and who was left off the list.

For example, Turkey, a fellow NATO member, and Egypt, a key U.S. ally in the Middle East, were also left off. The Biden administration has raised human rights concerns about both nations. However, Poland, which has faced criticism for undermining the independence of its judiciary and media, was invited.

White House press secretary Jen Psaki said the invitation list was not meant to be a “stamp of approval or disapproval.”

“It’s just meant to have a diverse range of voices and faces and representatives at the discussion,” she said.