Biden says economy ‘in strong shape’ ahead of holidays 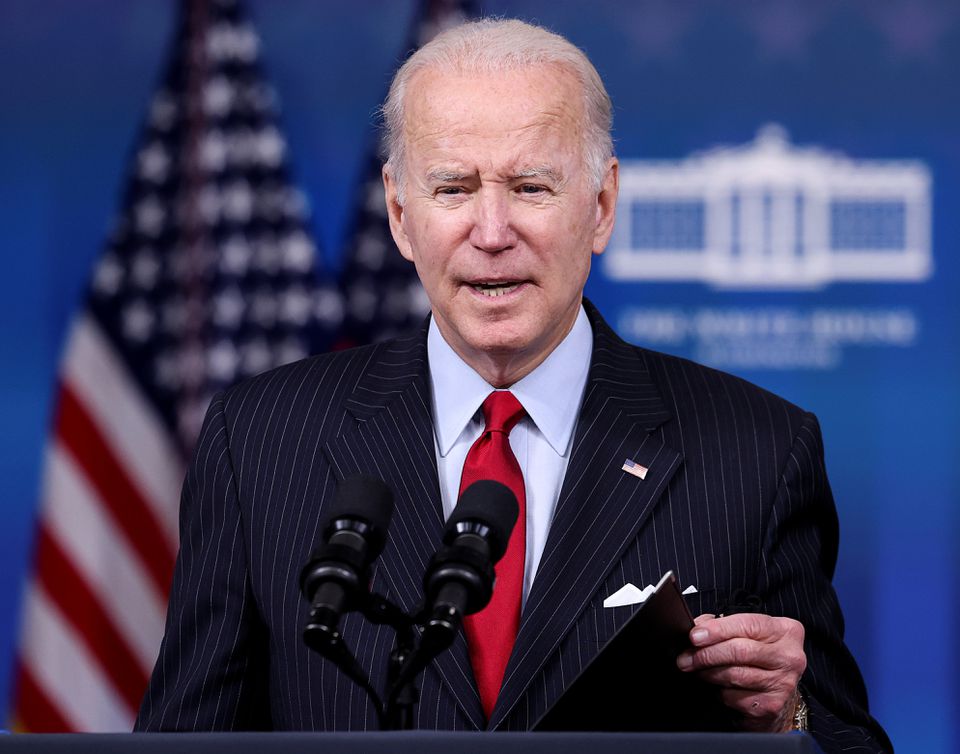 The US economy is in a strong position, President Joe Biden has said, thanks to action taken by the government to free up supply chain blockages and tackle the rising cost of living.

He predicted that prices, which have been rising sharply, would ease.

The president said policies to tackle bottlenecks at ports and lower the price of fuel were working.

“We’re heading into a holiday season on very strong shape,” he said. “It’s not because of luck,”

Asked how supply chains would weather disruption from the new variant of coronavirus, President Biden said he was an “optimist”, but that it was too soon to know what the impact might be.

As a result of the economic recovery a typical American family was now better off than before the pandemic struck, the president said, describing a 40% reduction in child poverty as “a moral victory”.

Since taking office, the Biden administration has pumped billions of dollars of stimulus into the US economy, including direct cheques to households and tax breaks.

Economic growth has rebounded as the impact of the pandemic began to ease, and after shrinking 30% in the first six months of 2020, the economy is now back at the size it was pre-pandemic.

However, higher demand for goods, and on-going disruptions to the supply and delivery of those goods, has helped push inflation up to 6.2% – the highest it has been for 31 years.

Releasing part of the US’s oil reserves last month, in an action coordinated with several other nations, to try to bring down the price of fuel had been “making a difference”, he added.

The bill was fully paid for, and would contribute to deficit reduction, by “making the largest corporations and the richest Americans pay a little more in taxes”.

A change in mindset

The $1.9tn (£1.4tn) Build Back Better bill, which includes social and climate spending, still needs to be voted on in the US Senate.

Asked why he believed he would be able to bring down inflation when previous administrations in the 1970s and 1980s failed, the president said: “This is the first time I’ve seen labour and business so ready to cooperate.

“People are in a different state of mind than in the Carter and Nixon years.”

Earlier this week, President Biden hosted the chief executives of several of the countries’ largest manufacturers and retailers, including Walmart and CVS Health, Mattel and Best Buy.

The executives reported that their inventories were up and shelves well-stocked, ready to meet the consumer demand for the holidays, he said.

Biden said the administration had “broken up log jams” in the supply chain through various methods, such as by encouraging port operators to work longer hours.

He also pointed to the easing of rules over truck drivers’ hours. The measures were working, he said, with the number of containers left sitting on docks for over eight days down by 40%.

Michael Pearce, US economist at Capital Economics, thinks the president was right to suggest that some of the stresses on the economy were starting to ease, but that all the problems wouldn’t go away overnight.

“It’s still the case that there are very severe supply problems. Even if they’re starting to fade, it’ll take some time for that to work its way through, especially now that inventory for a lot of goods is so lean,” he told the BBC.

Inflation which remained would therefore persist well into next year, he said, in part thanks to the trillions of dollars pumped into the economy through the pandemic.

The Omicron variant, and expectations that it will hurt economic growth, were probably having a greater impact on the price of fuel, than the move to release oil reserves, Mr Pearce added.

Diane Swonk, chief economist at Grant Thornton, thinks Mr Biden’s Build Back Better bill could have a pro-inflationary impact in the short term unless it was tweaked further by lawmakers.

She felt Omicron, the easing of supply chain problems, and a reduction in government stimulus over the coming months would “take the steam out of inflation but it won’t cool it down enough”.

“The risk is until we can really wrestle the virus to its knees we’ll continue to see disruption, even as demand starts to slow again,” said Ms Swonk.

“We’re starting to see more broader based inflation that likely will linger longer.”