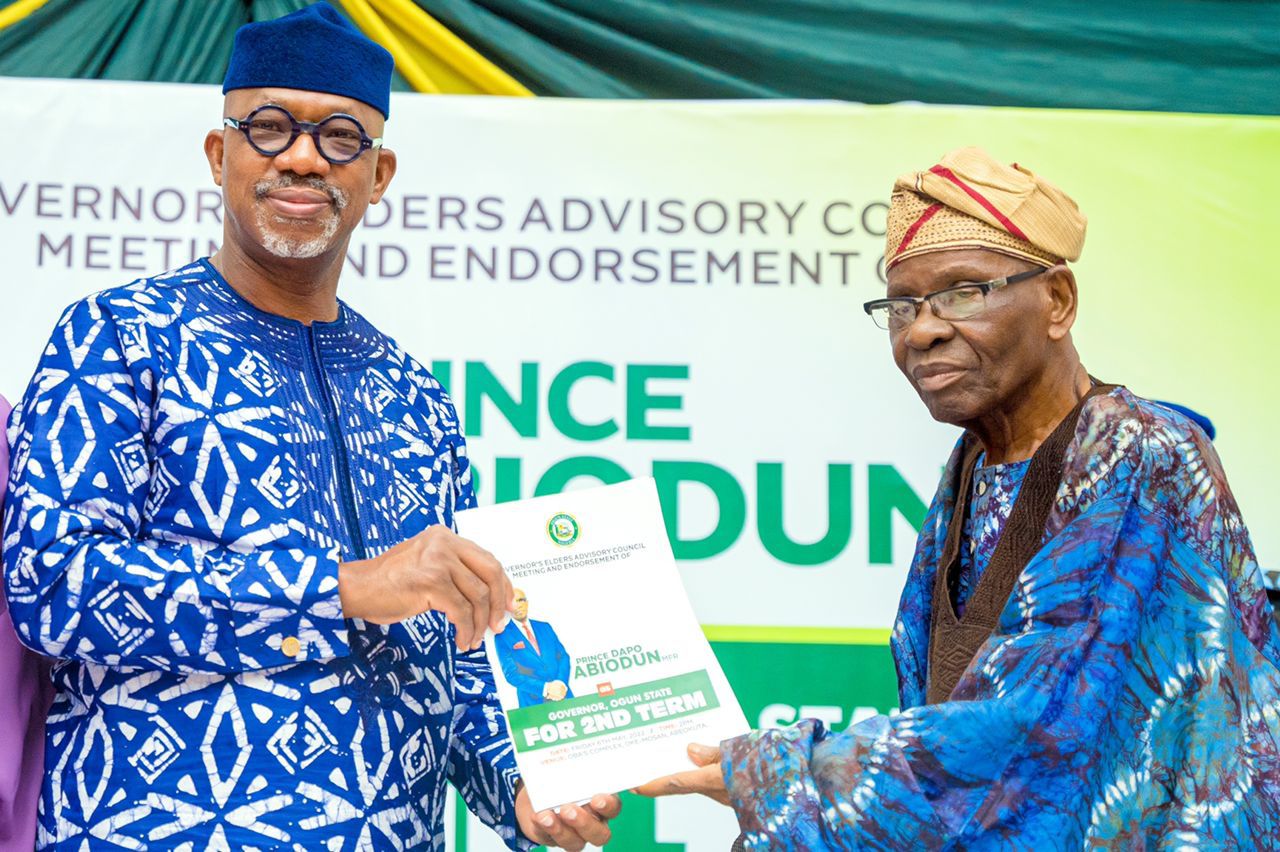 The second term in office aspiration of the Ogun State governor, Dapo Abiodun, received a boost on Friday as the Governor’s Elders Advisory Council, officially endorsed the second term bid of the governor.

Giving the position of the Council, its chairman, Chief Oluleye Okuboyejo, in a proclamation he read at the Oba’s Complex, Oke-Mosan, Abeokuta, particularly commended the governor for the increase in the ease of doing business index, which according to him has significantly increased investment in the state.

Okuboyejo added that Abiodun in the last three years had proved himself to be a great marketer of the state, noting that “his marketing acumen is responsible for the rise of the state’s internally generated revenue”.

He further noted that since the inception of the current administration in the state, Governor Abiodun has been methodical in fashioning the policy agenda around ‘ISEYA’, saying that

“the smooth delivery of the social contract elements which could be seen across the state have even been applauded by the governor’s ardent critics”.

“We publicly endorse the second term ambition of our indefatigable governor.

The government under your watch is methodical in fashioning the policy agenda around ‘ISEYA’, the delivery of this social contract element has been applauded even by your ardent critics.

“We cannot but commend the increase in ease of doing business index that has significantly boosted foreign and indigenous investment in our state. Your Excellency has shown yourself as a great marketer of our state and the result is evidently clear in the rise of our internally generated revenue”, Okuboyejo stated.

While commending the administration of Governor Abiodun for completing projects inherited from previous administration in the state, the Council chairman noted that “the real selling point for this administration are confirmation that projects inherited from previous administrations have been completed and upgraded where necessary. From the Elite Road in Abeokuta South, Ajilete in Yewa South, Ajebandele in Ijebu-East, Oke-Agbede in Imeko, Awowo in Ewekoro, Alapoti in Ado-Odo-Ota, Ifoyintedo in Ipokia, Ibiade in Ogun Waterside, Ilugun in Odeda and Isiwo in Ijebu-Ode, the story of good performance continued to rend the air”.

Okuboyejo, while noting that other areas such as Oke-Sopen in Ijebu- North, Ilishan in Ikenne, Onidundu in Obafemi Owode, Ipara in Remo-North, Ososun in Ifo, Ishote in Sagamu and Ita-Oshin in Abeokuta-North, among other towns across the state were not neglected, applauded the way and manner which the state government had been able to address issues of social order, protection and security in the state.

“The issue of social order and protection is also germane to the elders and we applaud the way and manner which the state government has been addressing the matter.

“It is no gainsaying to state the fact that security is everybody’s business and the workable framework that has been provided by the government assures us that things will be getting better in our dear state,” he submitted.

In their respective remarks, Chiefs Fohunola Abiola, Ibunkunolu Ojosipe and former deputy governor of the state, Alhaja Salimot Badru, representing the Ogun Central, East and West Senatorial districts of the state, commended the state governor for not developing any part of the state at the expense of the other.

They said that aside from governing with the fear of God, the governor was also able to approach governance of the state with the spirit of equal distribution.

Responding, Governor Abiodun who noted that the endorsement by the Governor’s Elders Advisory Council was a position of trust, said that he would not deviate from his mission to rebuild and also continue in the part of honor and integrity.

Abiodun, while pledging that he would continue to do what he was elected into office to do, promised to continue to be inclusive, accountable, responsive, just and fair.

Abiodun informed the Council that his administration’s efforts this year would be concentrated more on electricity generation and water to further boost the socio-economic development of the State.

“Our focus this year will be on electricity generation and water supply. This is because we feel that those are the areas we need to focus on. We have continued to implement the ISEYA Programmes without leaving any part of the State behind. I promised that we will complete any project that has a direct impact on the lives of our people and that we are also doing”, the governor stated.

He maintained that his administration has touched all sectors of the state economy and ensured that all parts of the state are treated equally in the distribution of projects.

“This mandate was the goodwill of the people of this state and I will not take it for granted knowing fully well that it is not a birth right nor an inheritance. When I was sworn-in, I promised to be fair, accountable, consensus oriented, transparent, just and equitable to all sections of the state and we are doing just that”, he added.

The governor, however, noted that one of the signature projects of his administration, the cargo airport is progressing steadily.

“The airport that for many preceding years was just an idea, but to the glory of God the runway is being asphalted as we speak. That airport will be truly an international cargo airport and passengers airport. By the grace of God on or before December 2022, an aircraft will land at the airport signalling the commencement of air traffic operations at the airport”, Abiodun pointed out.

While thanking the Elders for believing in his ability and for endorsing him for the second term in office, noted that their action would propel him to work harder.

“What happened this afternoon can only further motivate myself and my team to which I owe all the successes you showered on us.

“You have helped in managing issues at the local government levels. You have helped us through your advice and counsel. Please continue on that path of honesty. Help us superintend on issues that will bring peace in the state especially during this political era”, the governor stated.