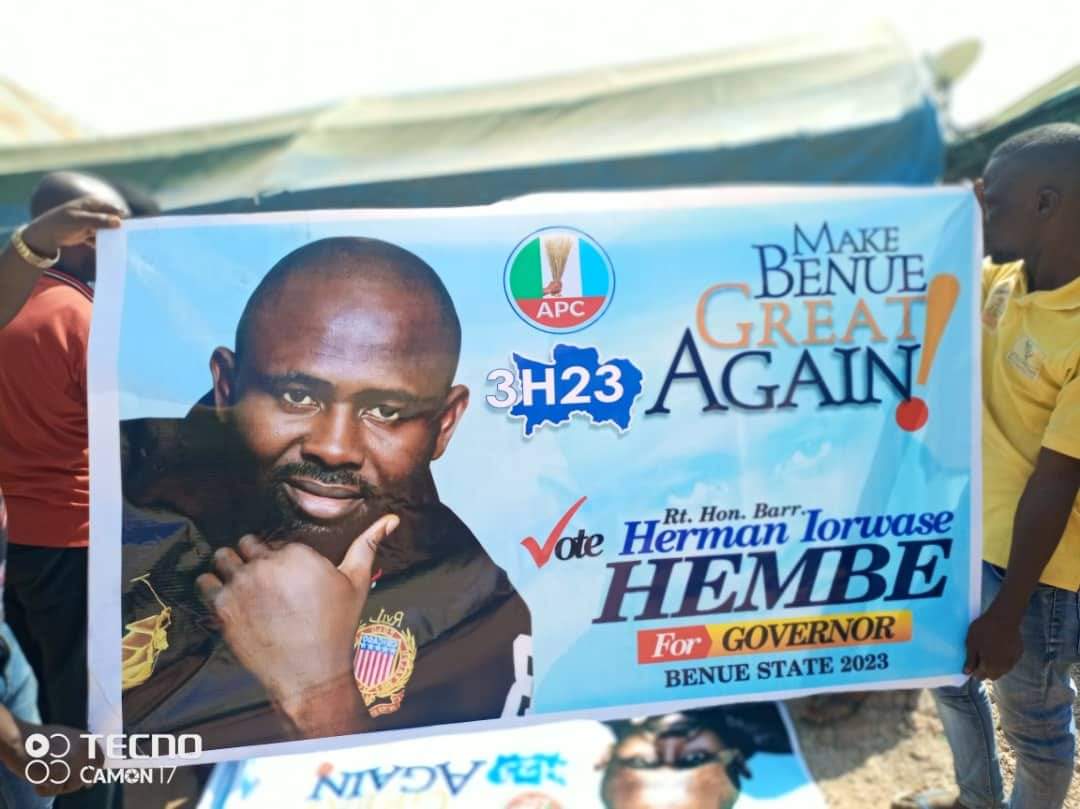 In Kwande, the chairman of the Inauguration headed by the former HoR member representing Kwande/Ushongo, Hon.Barr Benjamin Wayoh presented the Kindred canvasers, Wards coordinators as well as the LG cordinator of Hon. Hembe campaign team from 15 council wards across Kwande LG including Adikpo township to HEMBE campaign Team.

The Jechira Representative and his campaign Team received the Kindreds canvassers , council wards coordinators as well as the LG coordinator and inaugurated them accordingly.

Hon. Hembe Informed the people of Kwande that he had started his gubernatorial journey in Kwande owing from the fact that Kwande is his MATERNAL home hence he sought for their blessings.

Recall that, Hon. Hembe has won election to represent the good people of Jechira for the record 4 times using 3 different parties, PDP, APC and APGA respectively. He reminded them that he has achieved this feat as a result of his antecedents and not because of God fatherism or Favouritism. He informed the good people of Kwande that, he is contesting for Governorship election on his records, hence he is ready to work for the progress and development of entire Benue State and not for his selfish interest of primitive accumulation of wealth.

Barr. Herman appealed to the people of Kwande to mobilize for APC as a party and pitch tent with him so that he would win the election at the end of the day and bring back the lost glory to Benue State.

Speaking on behalf of the coordinators, the Kwande LG Hembe Campaign team, Hon. Tile Pine who was appreciative to Hembe for entrusting his campaign for the LG in their hands pledged his unalloyed support to ensure Hembe’s victory during primaries and the general election accordingly.

The woman leader Hon Mrs. Sewuese Tse who spoke on behalf of the entire women was full of praise for Hembe for bringing them together to be united for a singular course of ensuring Hembe’s victory in the forth coming anticipated direct primaries, and subsequently teaming up behind hm during 2023 polls. She promised on behalf of the women to put in their best to deliver APC to Benue State hence Hembe’s speech alone was enough to win their supports.

Later on the same day, the Hembe Campaign Team proceeded to Ushongo LG for the same mission. The Team was received by the formal Chairman of the local government, John Moughsha in Lessel, the LG head quarter . Hon. Moughsha who later spoke on half of Kindreds canvasers, Eleven ( 11) wards coordinators, and the LG cordinator accepted to work for Hembe together with the entire Ushongo people and appealed to Hon. Hembe to remember them after he is being elected as the governor of the State.

In his speech, Hon. Hembe reaffirmed his readiness to work for the good of entire Benue State if being elected. He informed them that he is ready to be familiar with those who are ready to work with him. He also explained to the good people of Ushongo how his years in the green chamber has attracted uncommon development to entire Jechira rangin from electricity, pipe bone waters, construction of bridges, recreational centers, youths/ women employment , employment amongst others. He informed them that his desire to Govern the good people of Benue State is born from aforementioned antecedents.

Hon. Hembe appealed to Ushongo people to canvass support for him to ensure his victory during primaries and general election thereafter.

Hembe campaign Team later donated campaign crested T-shirts and Billboards to all the kindreds, wards and the entire Kwande and Ushongo Local governments.