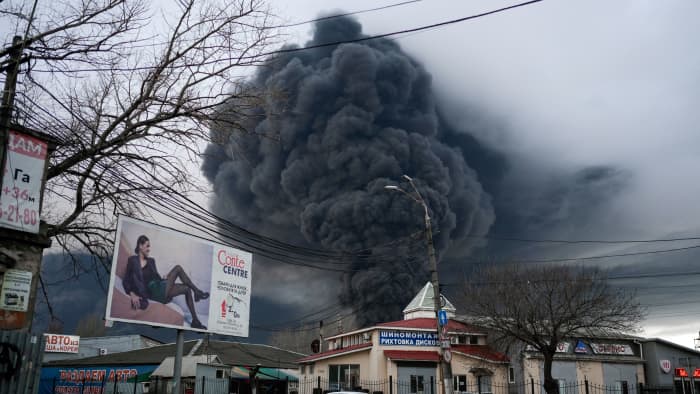 It was the morning of 11 March in the eastern Ukrainian region of Dnipropetrovsk Oblast, when a bomb crashed into Olena Selichzianowa’s home – and her family.

Speaking in Russian, the mother of five-year-old twin boys, Nazar and Timur, describes how she fell to her knees, pulling her sons beneath her to protect them from the pieces of shrapnel. After the bomb’s impact she recalls nothing.

All three were blinded by the flying fragments that cut into their arms and faces. Their skin was badly burned, a small shard of glass embedded itself in one of Olena’s eyes and her leg was broken.

The family were pulled from the wreckage and taken to a nearby hospital, but their wounds were so serious they had to be moved quickly.

The family were pulled from the wreckage and taken to a nearby hospital, but their wounds were so serious they had to be moved quickly.

In Lviv, eye specialist Dr Nataliya Preys was made aware of this family’s injuries. Dr Preys sent images of the wounds to her former teacher in Poland, Professor Robert Rejdak, at the Medical University of Lublin.

He knew the three needed to be treated immediately. But the fighting in Ukraine meant it would take a week for Olena, Nazar and Timur to reach Poland.

“They have come from hell,” Professor Rejdak told us. “The mum was completely blind, she could only reach out to touch her children. The children were so hungry and tired when they first arrived that they only ate, slept and cried.”

He is visibly moved as he recounts their first meeting. Then, his expertise as a leading surgeon at one of Europe’s largest eye hospitals takes over.

“We decided to operate on mum. I performed bilateral cataract surgery. The surgery was really complicated because of the wounds, because of a piece of glass inside one eye.

“Fortunately the surgery went really perfectly and Olena sees almost fully two days after. The healing process is perfect so I hope it will be even better – but at least now she can see her boys and look around.”

The little boys’ journey to health will take longer.