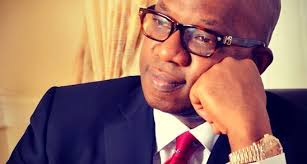 It would be recalled that Ikangba/Ilese road was among the 12 roads construction contracts awarded in the sum of 100bn naira by the immediate past administration of Ibikunle Amosun -led APC government, in 2012. Sometimes around 2018, the contractors were mobilized and works commenced on the road, with houses demolished, only for the road project to be abandoned halfway, and in terrible conditions ever since then.

This abandoned road project stretched from Ikangba-Obalende-Lagos Garage-Oke Owa-Ilese, totalling 20km, and was meant to be four-lanes! Since then, residents and communities have resorted to self-help to make the road motorable, particularly the Ikangba section of the road.

On like other roads needing attention across the lengths and breaths of Ogun state, but left abandoned by the present Dipo Abioun-led APC government, under the false premise that these roads have “no economic “ importance, therefore resorting to using road construction as patronages to demand and maintain personal loyalty, the Ikangba road represents enormous economic potential with attendant employment opportunities for the teeming youths of Ogun.