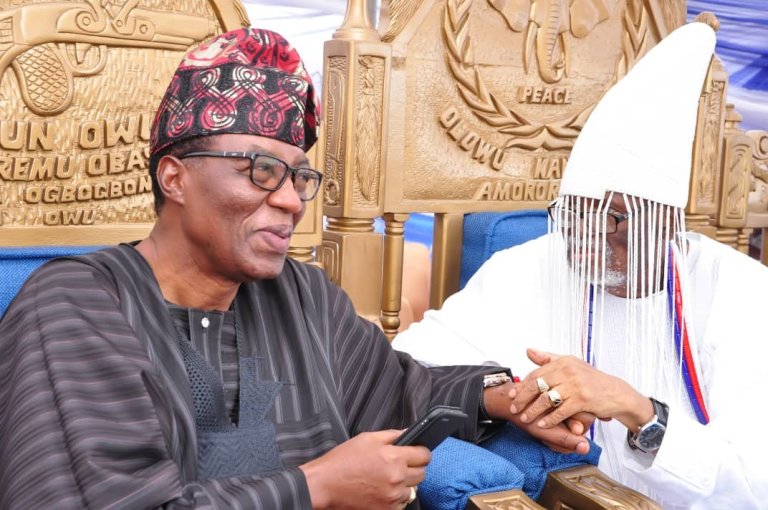 Former Governor of Ogun State, Otunba Gbenga Daniel has described the painful passage of the Olowu of Owu Kingdom, Oba Olusanya Adegboyega Dosumu as a great loss to Nigeria, to Ogun State and to the entire Owu people home and abroad.

The former Governor who is also the Aare Ajibosin of Owu Kingdom described late Oba Dosumu as a great bridge builder, a compassionate and highly principled personality who stuck to his own conviction no matter whose horse is gored.

“Oba Dosumu is such a highly principled personality, whenever he made you his friend he went all the way with and for you. He was a great bridge builder whose passion for the development of his immediate community is second to none. He earned the respect of all his Subjects and this made his efforts at uniting the whole Owu people and to bring about peace in his kingdom east to achieve.

“I benefitted immensely from Oba Dosumu’s friendship and advise. We share very mutual relationships up until the moments of his death.”

Otunba Daniel expressed his condolence to the Balogun of Owu Kingdom, former Nigerian President, Olusegun Obasanjo, the Governor of Ogun State and the Alake of Egbaland on this sad and painful loss.

“Death is one debt we all owe, it is inevitable, but our prayers is that when it must come, we must all be remembered for all the good things we did while on earth. Oba Dosum was a shining example of a good natured man who is fiercely loyal to his friends and convictions.

“My deep condolences to Baba Obasanjo, the Balogun and symbol of Owu identity and unity all over the world. I pray God grant him the strength to manage this grief; I share in the pains of the Governor of Ogun State, Prince Dapo Abiodun and the Alake of Egbaland, Kabiyesi, Oba Adedotun Aremu Gbadebo on the painful exit of Oba Dosumu. I pray that God should grant them all the fortitude in this trying period”