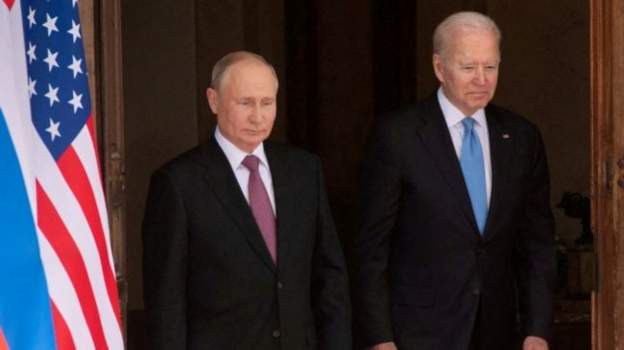 “The capital is the heart of Ukraine, and it will be defended. Kyiv, which is currently the symbol and forward operating base of Europe’s freedom and security, will not be given up by us,” the mayor says.

Firefighters work to put out a fire in a residential apartment building after it was hit by shelling as Russia invasion of Ukraine continues, in Kyiv, Ukraine.

A 35-hour curfew has come into force in Kyiv after several tower blocks were attacked by Russian forces based outside the city, Mayor Vitali Klitschko has said.

People will only be able to move around the city with “special permission” except to “go to bomb shelters”, the mayor said.

“The capital is the heart of Ukraine, and it will be defended. Kyiv, which is currently the symbol and forward operating base of Europe’s freedom and security, will not be given up by us,” he added.

He has been talking to residents and “they don’t want to leave, (they) want to defend our city”, he said.

“They’re really upset about what Russian soldiers are doing to civilians.”

People are asking about weapons and want to join civil defence forces to protect their homes, he added.

His brother, Wladimir Klitschko, said Russian troops are so close you can “throw a stone” at them, adding: “I’m not even kidding.”

His frustration with the reaction of the West was clear, describing it as a “policy of waiting and looking”.

He said. “Wake up, guys. It’s a wake up call and it’s been called for the past 20 days and you must act now. If you hesitate, hesitation is considering to be dead. Isolate Russia. Stop this War.”

Every second, another child becomes a refugee

More than three million people have fled Ukraine since Russia invaded on 24 February, the International Organisation for Migration has said, taking its figures from national authorities.

More than 1.8m of them travelled to Poland, the UNHCR said, with spokesman Matthew Saltmarsh adding that 300,000 had moved on from there to western Europe.

CCTV in Kharkiv of an explosion near an apartment block

And on average, on each of the last 20 days, 73,000 Ukrainian children have become refugees, Unicef has said.

A spokesman said they were heading towards Poltava, in central Ukraine, adding that the Russian side had given a green light for the evacuation.

A new attempt will be made to deliver supplies to Mariupol. The city council said 2,000 cars had been able to leave on Tuesday.

People trapped there by Russian shelling are “essentially being suffocated with no aid”, Mr Watson said.

The mayor of Kharkiv says more than 600 buildings in the city have now been destroyed by Russian shelling.

He also said anyone who wants to leave still can do by train or road.

In an update on Tuesday morning, the UK’s Ministry of Defence (MoD) said it appeared Russia was trying to “consolidate political control” of Ukraine.

According to reports, Moscow may be seeking to “stage a ‘referendum’ in Kherson” in an attempt to “legitimise the area as a ‘breakaway republic’ similar to Donetsk, Luhansk and Crimea”, the MoD said in its latest intelligence update.

There have been “multiple demonstrations” over “several days” in the “Russian occupied” Ukrainian cities of Kherson, Melitopol and Berdyansk, it added.

The MoD said Russia had reportedly installed its own mayor in Melitopol following the alleged abduction of his predecessor on Friday, and that the mayor of Dniprorudne had also reportedly been abducted by Russian forces.

“Russia is likely to make further attempts to subvert Ukrainian democracy as it attempts to consolidate political control of Ukraine,” it concluded.

Foreign Office minister James Cleverly told Sky News: “A faux election to try to justify Russia’s aggression to Ukraine will be recognised for exactly what it is, and that is a fake.”

Russia’s defence ministry said on Tuesday morning that its forces had taken control of all territory in the Kherson region, Russian news agencies reported.

President Zelenskyy, in his nightly address, said he wanted a “fair peace”.

“Our delegation also worked on this in negotiations with the Russian party. Pretty good, as I was told. But let’s see. They will continue tomorrow.”

Ukraine’s president also issued a stark choice to Russian troops, telling them that if they continue to attack his country: “Your life will be taken.”