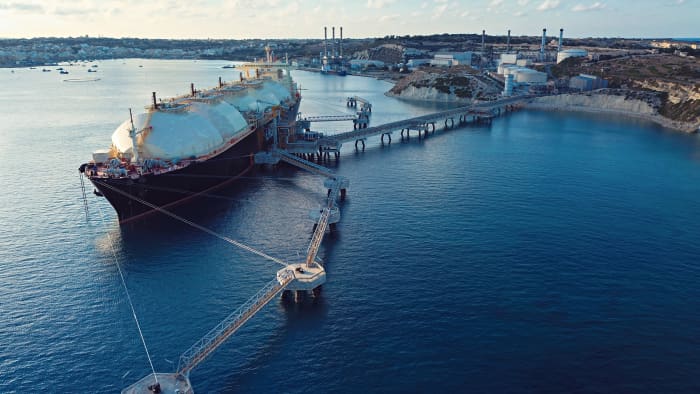 Kyiv’s Mayor Vitaliy Klitschko has imposed a city-wide curfew from 10pm to 7am as fears of potential Russian air strikes grow, with one civilian saying “there is no safe place left.”

Speaking in the Commons on Thursday, Johnson announced the “largest and most severe package of economic sanctions that Russia has ever seen.”

Russian forces launch a full-scale assault on Ukraine, with its military attacking the country from the north, east and south

People in the capital, Kyiv, have been hearing explosions and air-raid sirens throughout the day

Ukraine vows to fight back, and its president warns this could be the start of a major European war

Vladimir Putin warns that Moscow’s response will be “instant” if anyone tries to take on Russia.

On the street bounded by the golden domes of St Sophia’s and St Michael’s cathedrals, it’s dark and surreal.

Jets are flying overhead intermittently and there’s an acrid smell in the air. It smells like burning papers.

Three soldiers came by, looking for a man with a drone. Everyone is on edge.

The busses are still running, but I can see barely any passengers.

What sanctions is the EU considering?

It is understood the EU could suspend part of its visa facilitation agreement with Russia in its latest sanctions package.

Sources have indicated that it would affect new arrivals and those “linked to the [Russian] regime” – such as officials, diplomats and the military.

On calls to cut Russia off from the financial messaging service Swift, one senior diplomat said that while the idea was “out there”, it wasn’t the focus for now.

Swift allows quick transactions and is used by 11,000 financial institutions in 200 countries.

But if it’s not in the upcoming EU package, they said, that “doesn’t mean it’s off the table”.

Officials have indicated that the package is likely to include measures on export controls, the financial and industrial sectors.

Labour leader Sir Keir Starmer is now speaking. He says the Russian people, as well as those of Ukraine, will suffer, having been “plunged into chaos by a violent elite”.

And the UK will suffer economic pain because of sanctions, but this is a necessary “sacrifice” to stop Vladimir Putin, he adds.

He also calls for a full overhaul of the UK’s financial system to target oligarchs’ investments.