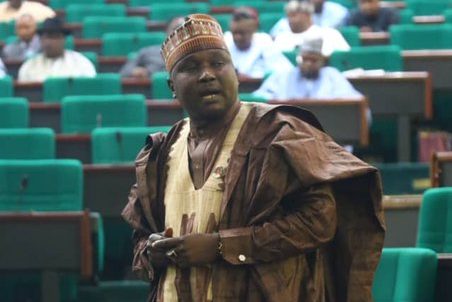 For reasons of unintended embarrassment and, perhaps, the need to avoid costly insinuations, a Yoruba adage advises against debating the number of children produced by other people.

But this lawmaker, the Majority Leader, House of Representatives, Hon. Alhassan Ado Doguwa, has made sticking to this agelong wise saying somewhat difficult.

Doguwa announced yesterday that one of his wives just gave birth to a child, and with the new addition, the lawmaker, who is only 56 years, now has 28 children.

What’s more? He has promised to reach 30 by next year, such that he even joked about having a polling unit in his compound.

Most likely an aspiring speaker in the next dispensation, Doguwa, sometime back, brought his four wives to the floor of the House to show off. It was there he announced his 27 children and said he was not done.

The more, the merrier, he enthused and today, he’s lived up to that promise with an addition, promising to reach his 30 projection by 2023.

Now, apart from politics, what else does this man do? He’s probably lived his entire life feeding off the public purse and not done yet. This, nonetheless, he plans to birth more children for Nigeria to cater to.

But, the question is, despite living off government, can he take care of all his children? Can he nurture them to minimum standard? Can he educate and feed them properly? After all, he wouldn’t be a lawmaker for the rest of his now fantastic life.

The other day he shamelessly told the Speaker, Femi Gbajabiamila, how he couldn’t recognise one of his children at an instance, we should consider shameful and worrisome.

According to the short story, he arrived his compound late that day and saw the child playing, amongst others. He immediately told him it was late and time to go home to his parents, not knowing he was his.

Yet, this fellow is raising more kids. For who exactly? How are you able to plan for a child you can’t recognise is yours? How do you provide for the feeding, education or even instill basic etiquette into 28 children, if you could not recognise one as yours? And, yet, you’re still counting?

It may be easier to laugh this off, but a huge problem of population explosion awaits the country in the foreseeable future with all its attendant crises. With the like of Doguwa birthing children they obviously can’t raise, can we begin to interrogate the role of education in our lives, really?

This, indeed, is a classic case of the clash of civilisations!