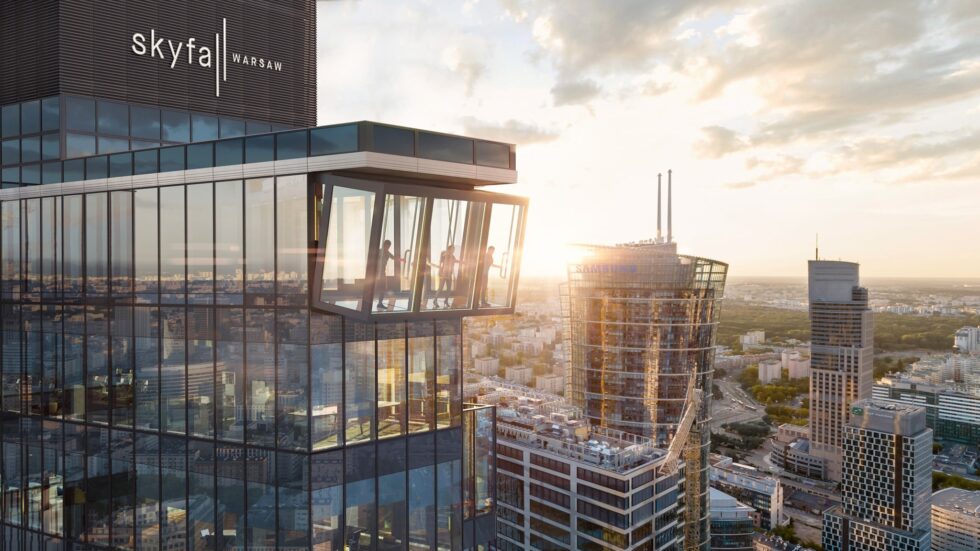 A new tourist attraction in Warsaw will offer brave visitors a panorama of the capital at 200 metres above ground level, making it the highest viewing terrace in the country.The glazed tilting platform, Skyfall Warsaw, on the 46th floor of the Warsaw Unit skyscraper, will be the first of its kind in Europe and only the second in the world.

Four people at a time can stand on the platform, which is over 70 metres higher than the viewing terrace in the Palace of Science and Culture. Once they are safely in position and holding tightly to the handles, it then tilts outwards by 15 degrees.

Skyfall is the only attraction of its type in Europe and just the second in the world, say the company behind it. Only Tilt 360 in Chicago offers a similar experience. The Willis Tower in the same city also has a glazed floor.

“We try to make sure the skyscrapers we build are open to Warsaw’s residents,” said Jeroen van der Toolen of Ghelamco, which built the Warsaw Unit as well as the Warsaw Spire, another new addition to the capital’s skyline.

He said the idea for the tilting platform came after an open evening was held at the Warsaw Spire, where the public could see the views from the 41st floor. “Thousands of people visited us,” said van der Toolen.

“And that was where the idea of Skyfall Warsaw came from, a place that guarantees spectacular views and extreme sensations.”

As well as the viewing platform, Skyfall will feature a bar spanning 500 square metres and room for up to 200 people for events. The venue is already open to companies and organisations, and will open to the public at the start of next year.

Tickets are likely to be priced around 40 zloty (€8.50). The tourist attraction will only be open at weekends to avoid disrupting the work of the companies based in the building.

A reporter for Spider’s Web who tried out the platform described the experience as “surreal”.

“It reminds me of errors in some video games when the gamer’s character arrives in a place unforeseen by the developer. I felt as if I was part of a glitch, but in reality.”

At 202 metres in height, the Warsaw Unit is Poland’s sixth tallest building. Nine out of the top ten are in the capital, six of them completed in the last decade.