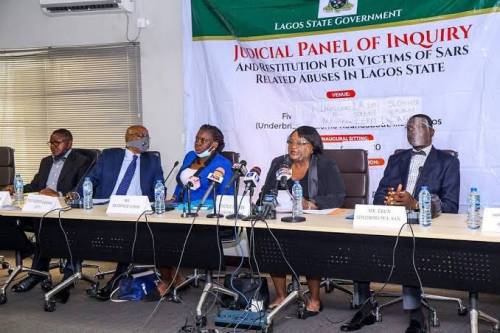 ENDSARS PANEL: MY TENTATIVE COMMENT While l was away, l read quite a number of reactions to the Endsars panel unsigned report shared online. What l have been able to distil are emotive reactions, rather than a dispassionate analysis of the report. At the end, emotive reactions ended up obfuscating the real issues. The fact is that if people have made up their minds over an issue, it is immaterial if there are compelling contrary facts. In mass communications theory, it is called selective perception. When emotions are high, reason takes flight.

First, l need to state upfront that l have tremendous respect for members of the panel but like a court judgment, including Supreme Court verdicts, they are subject to dissection and analysis. After all, were we not all here when the Supreme Court judgement on Imo governorship election was torn to pieces by many commentators? Therefore, the report of the panel could also be dissected. I have gone through the panel report and l found a couple of inconsistencies therein, where the conclusion could not be supported by the evidence.

My position is that human life is sacrosanct and the loss of just ONE LIFE is bad enough, irrespective of the circumstance. The evidence of a key witness, the Chief pathologist, Professor Obafunwa was crucial. He said 99 bodies were picked up from different parts of the state during the Endsars protests and from his evidence, three of those bodies could be traced to LeKki. But I’m curious how the panel did not find the death of other 96 citizens who didn’t die at LeKki to be important to be form part of its conclusions and recommendations.

Even more curiouser is the silence on all the policemen who were killed during the protests, some killed is grotesque manner. Every life matters, whether at LeKki or elsewhere. I don’t want to go to other inconsistencies in the report which some people have dealt with, while we await the White paper of the state government.

Finally, l find it laughable that Reno Omokri claimed to have secured 75,000 signatures, requesting the International criminal court to try Buhari for crimes against humanity over the panel report. Look, those who have been following me know that I’m unsparing when l want to criticize Buhari and l have done it severally but hey, sending an unsigned panel report, sourced from the social media as the “exhibit” to the ICC to try Buhari for crimes against humanity, is just a joke taken too far.

Yes, the panel had a difficult assignment and the members are human beings who are not infallible but with profound respect to them, the report is not tidy enough and l feel disappointed.

This is my tentative comment, pending the outcome of the White paper. Richard Akinola II