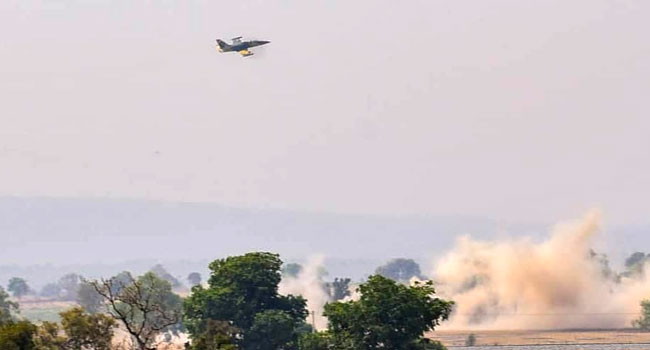 The air force said on Saturday that it had killed more than 70 Islamic State affiliated fighters in the Lake Chad area, at the border with Niger Republic.

The statement said aircraft from both Nigeria and Niger Republic had taken part in the operation.

The Lake Chad area is known for hosting fighters of the Islamic State West Africa Province (ISWAP), a jihadist group active since 2016.

With older rivals Boko Haram, the two factions have killed more than 40,000 people in the past decade and over two million people are still displaced from their homes due to ongoing violence.

As a result, they carried out airstrikes on April 14 at Tumbun Rego and a nearby training camp, using aircraft from both Nigeria and Niger, he added in a statement.

“Over 70 ISWAP terrorists were either eliminated or severely injured,” he said.

The military often scales up its offensive at this time of the year, before the rainy season starts.

Soldiers have been battling the jihadist insurgency for more 12 years.

Since last year, ISWAP has mostly taken over from its rival Boko Haram, after its leader Abubakar Shekau died during inter-factional clashes.

Shekau had gained international notoriety after kidnapping nearly 300 schoolgirls in Chibok in 2014.

Government troops are also battling heavily armed gangs in the northwest and separatist tensions in the southeast.

Share
Facebook
Twitter
Pinterest
WhatsApp
Previous articleFalana To Sanwo-Olu: We Want To See The Dividend Of N45 Billion Monthly IGR …. Says Lagos Is Working For Few Not Everybody
Next articleWhat We Will Do To Win Elections In Taraba – APC