HomeNewsThis Is Something Quite different: Overt Military Build-Up On Ukraine's Border Unlike...
News

This Is Something Quite different: Overt Military Build-Up On Ukraine’s Border Unlike Previous Conflicts In The Region, Expert Says 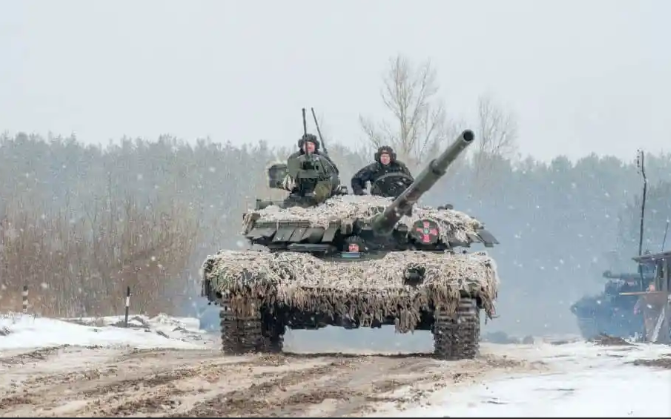 Former Moscow correspondent Dr James Rodgers explains that while he does not rule out Russian military action against Ukraine, a full-scale conquest is unlikely at this stage.

Whether or not Putin will go ahead with an invasion remains a mystery, Dr Rodgers says, as he speculates even high-level Russian officials could still be in the dark.

Russia has gathered around 130,000 troops around Ukraine’s border. Despite Moscow insisting it has no intentions of invading, the West warns Russian military action may be imminent.

Joe Biden on Thursday warned US citizens living in Ukraine to leave now, as “things could go crazy quickly” in the region.

Dr James Rodgers, author of Assignment Moscow: Reporting on Russia From Lenin to Putin, has covered the fall of the Soviet Union and Vladimir Putin’s rise to power, along with the Russo-Georgian war in 2008 and the annexation of Crimea in 2014.

The former war correspondent explains this escalation of tensions feels different than previous crises: “on neither of those occasions was the buildup of the Russian military quite so overt,” Dr Rodgers says.

Russia has gathered around 130,000 troops around Ukraine’s border. Moscow has repeatedly denied the presence of any troops in eastern Ukraine and insists the deployment of troops across its own territory should not alarm the rest of the world.

Joe Biden on Thursday warned US citizens living in Ukraine to leave now, as “things could go crazy quickly” in the region.

As the West reacts to Russia’s military build-up, President Vladimir Putin has doubled down on a set of demands released in December 2021 — including, significantly, a call to prevent Ukraine from ever joining Nato.

As a former Soviet republic, Ukraine has strong ties to Russia. In the three decades since Ukraine declared its independence from the Soviet Union, Ukraine has sought to align more closely with Western institutions, including the EU and Nato.

In July 2021, Putin published an article explaining he believed Russians and Ukrainians to be “one people” who share the same “historical and spiritual space.”

The alliance’s Secretary-General Jens Stoltenberg maintains that when the time comes to consider whether Ukraine, currently considered a partner of Nato, can be admitted into Nato, Russia will not be able to veto the decision.

The US rejected Russia’s Ukraine-Nato demand. High-level talks continue between Putin and other western leaders — including British Prime Minister Boris Johnson – but Russia has warned the West’s rejection of their key demand on Nato’s expansion is leading to a stalemate.

Putin and Chinese President Xi Jinping jointly called for Nato to halt its expansion, according to a statement released by the Kremlin, presenting a united front as relations deteriorate with the West.

The Chinese Ministry of Foreign Affairs (MOFA) described the meeting between the two leaders as “warm and friendly.”

Putin is among a small number of world leaders attending the controversial Beijing Games, as the UK, US and other nations declared diplomatic boycotts over China’s human rights record.

Interestingly, Dr Rodgers notes, the Russo-Georgian war began on the eve of the last Olympics China hosted: the 2008 Summer Games.

The fighting in Georgia began overnight on August 8, 2008; then-prime minister, Putin flew back from Beijing to take charge of the conflict.

“Russia wants a good relationship with China. I think it’s unlikely there will be any major move while the Olympics take place in Beijing. I think it would seem not the best way to build a relationship with an ally to distract from a big global event for them by starting a war.”

No one, except perhaps President Putin, knows what will happen next

“For Russia to actually invade the entire country and keep it under occupation would take an awfully big military force,” Dr. Rodgers says. “There are other questions too, because Ukraine and Russia have very close ties.”

Families straddle the border, Dr Rodgers explains, and for most of the past century the two nations were part of the same union of states.

While the annexation of Crimea, which was a Russian territory until 1954, was hugely popular among Russian society — Putin’s personal approval ratings rose to 85% in the wake of the conflict, Dr Rodgers notes — “it’s hard to imagine a large-scale invasion of Ukraine would have the same effect.”

“I absolutely don’t rule out some kind of major military operation, but an actual conquest or full occupation, I can’t foresee, at least at this stage.”

One interpretation of recent events, Dr Rodgers says, is that Russia has achieved what it wants to: “It’s got [Russia’s] views on the way the security map of Europe should be drawn back on the table, and it’s drawing attention to the situation as well.”

“So whether any of those troops do cross the border is still an open question, to which I do not have the answer. There’s probably even big parts of the Russian government and political establishment that don’t know the answer to that question.”

“I think the only person who does know the answer is President Putin, and maybe he hasn’t even fully made up his mind.”