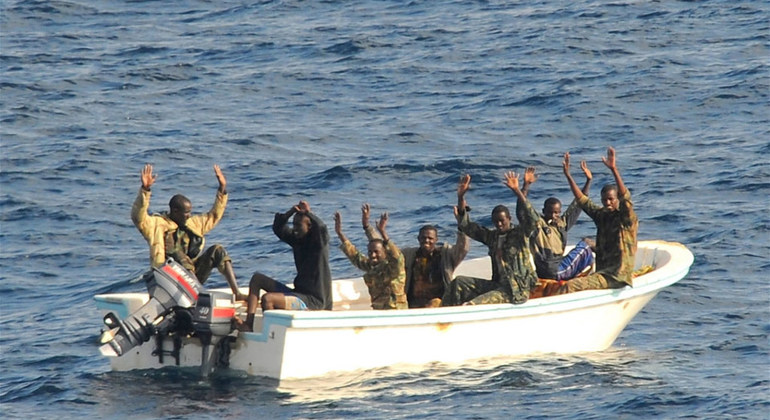 The UN Security Council on Friday adopted a resolution to combat the continuing threat of piracy off the coast of Somalia, as shipping and protection measures to keep vessels safe, have returned to levels not seen since before the COVID-19 pandemic.

The Secretary-General’s latest report on the situation in the country illustrates that joint counter-piracy efforts have resulted in a steady decline in attacks and hijackings since 2011.

However, although piracy off the coast of Somalia has been “repressed”, the ongoing threat of resurgence remains.

As such – under Chapter VII of the Charter, which provides for enforcement action – the Security Council adopted Resolution 2608, which, among other things, condemns piracy and armed robbery at sea off the Somali coast, underscoring that it exacerbates instability by introducing “illicit cash that fuels crime, corruption and terrorism”.

Through its resolution, ambassadors said that investigations and prosecutions must continue for all who “plan, organize, illicitly finance or profit from pirate attacks off the coast of Somalia”.

The Somali authorities were called upon to put in place mechanisms to safely return effects seized by pirates and to patrol the coastal waters to prevent and suppress future acts of armed robbery at sea.

At the same time, they were requested to bring to justice those using Somali territory to “plan, facilitate, or undertake criminal acts of piracy and armed robbery at sea”.

Member States were asked – at the request of the Somali authorities and with notification to the Secretary-General – to strengthen maritime capacity in the country and to appropriately cooperate on prosecuting suspected pirates for taking hostages.

The resolution also encourages the Somali Government to accede to the UN Convention against Transnational Organized Crime, and develop a corresponding legal architecture as part of its efforts to target money laundering and financial support structures on which piracy networks survive.

UN Security Council unanimously adopts resolution condemning and deploring all acts of piracy and armed robbery at sea off the coast of Somalia.

The Security Council renewed its call to States and regional organizations to deploy naval vessels, arms, and military aircraft to combat piracy, and stressed that the importance of international coordination.

At the same time, the resolution authorized – for a further three-month period – States and regional organizations cooperating with Somali authorities, to fight against piracy and armed robbery at sea off Somalia, “for which advance notification has been provided by Somali authorities to the Secretary-General”.

Through its resolution, the Council called upon all States to “take appropriate actions…to prevent the illicit financing of acts of piracy and the laundering of its proceeds…[and] to criminalize piracy under their domestic law”.

Countries were also petitioned to cooperate in the investigation and prosecution of anyone responsible for or associated with acts of piracy and armed robbery off the coast of Somalia, including international criminal networks.

Resolution 2608 welcomed the continued work of the UN Office on Drugs and Crime’s (UNODC) Global Maritime Crime Programme to ensure that those suspected of piracy are prosecuted, and those convicted, imprisoned in accordance with international legal standards.

Finally, the resolution recognized the International Maritime Organization’s (IMO) role concerning privately contracted security personnel on board ships in high-risk areas and welcomed its continued anti-piracy role – particularly in coordination with UNODC, the World Food Programme (WFP), the shipping industry and all other parties concerned.