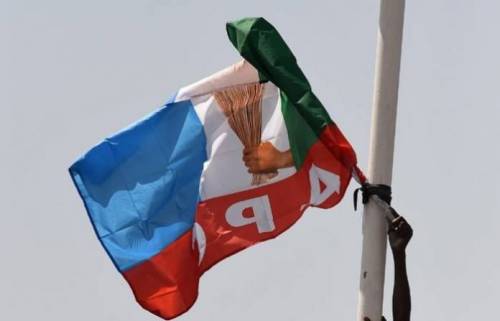 It is no longer questionable that our party, APC, is being held captive by small group of dishonest leaders whose only interest is to impose themselves as either Presidential or Vice-Presidential candidates for 2023 elections. Led by His Excellency Mai Mala Buni, who is entrusted to work with other twelve members of the Caretaker and Extraordinary Convention Planning Committee (CECPC), saddled mainly with the responsibility of organising the APC National Convention to elect new leaders of the party, sadly majority of the CECPC members have been reduced to observers as meetings hardly take place and even when meetings hold, decisions are hardly implemented.

The other Person who is also active in this political ponzi scheme is the CECPC Secretary, Sen. John James Akpanudoedehe, who is also aspiring to emerge as the Akwa Ibom Governorship candidate of the APC for 2023 elections.

In the case of His Excellency Hope Uzodinma, he is being alleged to be aspiring to emerge as a Vice-Presidential candidate to a Northern candidate.

Already, His Excellency Yahaya Bello has declared his aspiration to emerge as the 2023 Presidential candidate of the party.

As for His Excellency Dapo Abiodun, he is being guaranteed a second term ticket to emerge as the Ogun State Governorship candidate for 2023 election, which is to block any potential contest given the strong opposition he faces from the former Governor of the state, Sen. Ibikunle Amosun. Beyond guaranteeing His Excellency Dapo Abiodun second term ticket, His Excellency Mai Mala Buni has attempted to make similar offers to all first term Governors of APC. Some of these stories flying around are almost like tales by moonlight, but from every indication, they are true scripts being acted by His Excellency Mai Mala Bunu and his associates.

Consequently, there is so much uncertainty created, just to ensure that the party is manipulated to meet the aspirations of these dishonest leaders. Sales of forms to aspiring candidates for party offices to be contested at the National Convention was to commence on Monday, February 14, 2014. The speculation was that forms cannot be sold until zoning of offices are finalised.

Following the departure of President Muhammadu Buhari to the EU-AU Summit in Brussels, the argument became that zoning will only be finalised after his return. Then it became that there was disagreement among Governors on zoning. The latest is that some Governors are opposed to some offices of the party coming to their zones because of their Presidential or Vice-Presidential ambitions.

As things are, today being February 21, 2022, the National Convention is just five days away. Sub – Committees to handle specific responsibilities of organising the Convention were expected to have been announced on Saturday, February 19, 2022. No information has been provided by the CECPC. Now that President Buhari has returned from the EU-AU Summit, the old deceptive argument about Governors having meeting with President Buhari to decide on zoning and other matters related to the Convention has started again.

Recall that both His Excellency Hope Uzodinma and His Excellency Yahaya Bello met President Buhari before he departed Abuja for the AU-EU Summit. And His Excellency Hope Uzodinma, while addressing the Media hinted at the possibility of shifting the date of the Convention. In recent times, there has been so much speculation about shifting the APC Convention by two weeks. As part of the justification for postponement by another two weeks, issues of INEC bye – elections in some Federal constituencies across the Country also scheduled for February 26, 2022 are now being brought up.

It is clear that Mai Mala Buni is opposed to organising the APC National Convention on February 26, 2022 or any time soon.

Consequently, he is working with other dishonest leaders, notably, Yahaya Bello, Hope Uzodinma, Dapo Abiodun and some few others. For all that matters, as far as Mai Mala Buni, Yahaya Bello, Hope Uzodinma and Dapo Abiodun are concerned, even if there is decision to postpone the Convention by another two weeks, or any time soon, they will do everything to sabotage it and ensure another postponement.

It is a mutiny against the authority of the party and all its designated leaders, especially President Buhari, being carried by very dishonest people who can best be described as Yahoo Yahoo politicians. They are busy recruiting more dishonest and questionable leaders such as Uzor Kalu and they are moving to recruit some State Party leaders into their fold. Everything must be done to rescue APC from the hands of these Yahoo Yahoo politicians represented by Mai Mala Buni, Yahaya Bello, Hope Uzodinma, Dapo Abiodun, Uzor Kalu and their associates.

Both PGF, its leadership, President Buhari and all leaders of the party should take every step to reorganise the leadership of the CECPC. Mai Mala Buni and the Secretary, John James Akpanudoedehe should as a matter of urgency and in the overall interest of saving the APC should be replaced and removed as Members of the CECPC. The CECPC has very good competent and trustworthy leaders among the other eleven Members to pilot the affairs of the party and organise a successful National Convention immediately.

In addition, all collaborators in this Mai Mala Buni led Yahoo Yahoo political fraud, aimed at undermining the party and its leadership, which if not arrested will destroy the APC, involving Mai Mala Buni, Yahaya Bello, Hope Uzodinma, Dapo Abiodun, Uzor Kalu, John James Akpanudoedehe should be sanctioned.

Steps should be taken to disqualifying them from all electoral contests, as well as holding any leadership position, both within the party and in governments controlled by the party. APC must have zero tolerance for dishonest politicians.

As a party, APC must come out very strongly against every dishonest conduct by political leaders, no matter the positions they hold. APC must do everything possible to enforce discipline among leaders, which should include sanctioning leaders who betray trust or undermine the capacity of structures and functionaries of the party to implement decisions of organs.

If APC is to project its slogan as a party of CHANGE, dishonest and reprehensible conducts such as the ones being exhibited by Mai Mala Buni, Yahaya Bello, Hope Uzodinma, Dapo Abiodu, Uzor Kalu and some few others must be punished!

As a party, APC is now in a state of Emergency. Any slip will destroy the party. This is not the period to allow dishonest political leaders gamble with the survival of the party and by extension weaken the nation’s democracy.

Everything must be done to restore some minimum standards of conducts by leaders at all levels. Every party leader and member must wake up to the challenge of saving the party. APC is a product of sacrifices by leaders and members. Every sacrifice is required now to save the party.

May Allah (SWT) guide us to rescue APC from the current endless munity by Yahoo Yahoo politicians led by Mai Mala Buni and associate and return the party to its founding vision. Amin!