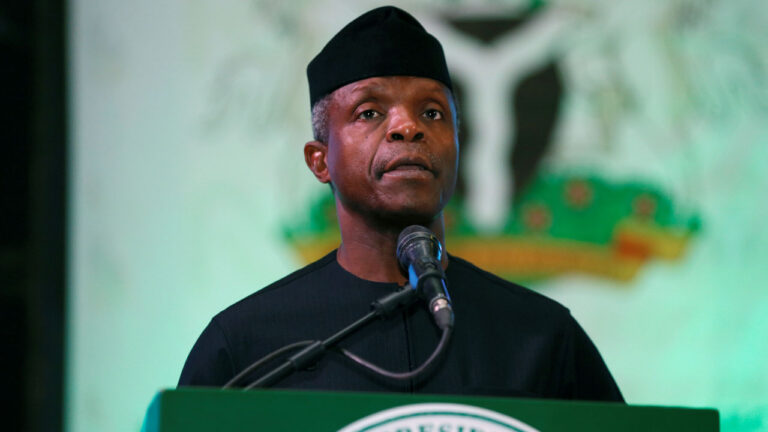 “We are solicitors to His Excellency, the Vice President of the Federal Republic of Nigeria, Professor Yemi Osinbajo, SAN, GCFR, (hereafter called “our Client” and on whose behalf and instructions we write this letter.

Our client’s attention has been drawn to your online news website publication of 04 November 2021, wherein you falsely and without foundation alleged that Chief Michael Ade Ojo, OON, MW, sold the land on which the collapsed structure was built to our client after he became the Vice President of the Federal Republic of Nigeria and that the developer was fronting for our client.

Your publication further alleged that our client used the influence of his office to secure building approval for the project in breach of building regulations.

Regrettably, your publication offered no credible source to the story beyond a local food hawker in the neighbourhood. Transactions of this nature are always in public records and a prudent and well — meaning journalist would have undertaken a simple task of applying to search the records to ascertain who the parties to the sale transaction of the land are or, cross check his facts with our client before rushing to the press. This, you intentionally failed to do.

For the records and avoidance of doubt, our client hereby vehemently denies your said allegations as factually baseless, reckless and malicious as he did not buy the said land or any other land (for that maker) from Chief Ade Ojo), nor does he own/hold any interest in the said land.

We also categorically state that our client is not in any way connected to the sale or purchase of the land in question. It is also complete falsehood that the developer is fronting for him on the project or that he did anything to influence his planning approval in any way.

At a time of national tragedy when responsible citizens are in a sober mood as a result of the loss of dozens of lives in the unfortunate incident, it is deeply saddening that your organization chose to latch on to the situation to attempt to score a cheap political point against our client.

We have our client’s instructions that your wild, unfounded, malicious and wicked publication aforesaid is both reckless and a figment of your contrived wicked imagination.

We cannot but agree that your said publication was maliciously contrived and calculated to drag our client’s name in the mud and destroy his hard-earned reputation which he has laboured over so many decades to build. We further view your publication as a calculated attempt to ridicule our client and soil his soaring image in the eyes of well-meaning and peace-loving Nigerians.Accordingly, we have our client’s strict instructions to demand and we hereby DEMAND for the immediate retraction of your malicious, libellous and irresponsible publication within forty-eight (48) hours of the date of this letter in the same conspicuous medium and coverage by which you published it with a letter of apology to be published in the same medium; in addition to publication in two widely circulated National dailies, failing which our next instructions are to ensure that we set the machinery of the law against your organization and publishers with substantial and punitive damages. This we intend to do without further recourse or notice to you.Please be guided accordingly.