HomeNewsNIGERIANS IN DIASPORA AS CATALYST FOR A NEW NIGERIA
NewsPolitics

NIGERIANS IN DIASPORA AS CATALYST FOR A NEW NIGERIA 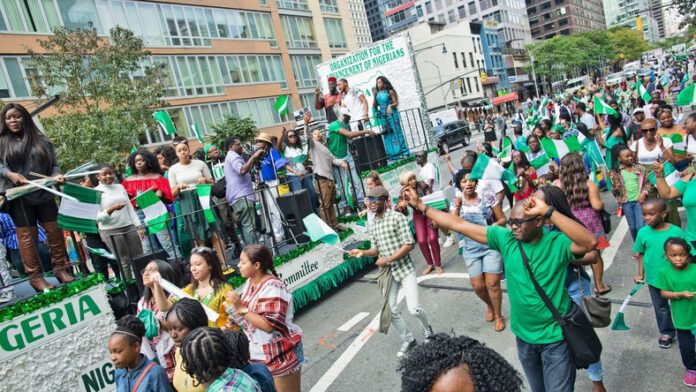 Being the text of a Keynote Address by Prince Ade Omole, Director, Diaspora Directorate, Tinubu/Shettima Presidential Campaign Council on the occasion of the 3rd Congress of APC-USA.

Let me start this presentation by congratulating members of APC-USA on this auspicious occasion of your 3rd Congress. This 3rd Congress couldn’t have come at a better time and at a critical juncture in our nation’s history in which you’re already an integral part, and will henceforth be expected to play a far more critical role in the 2023 presidential election that will birth the Fifth Republic and a new political dispensation. I, therefore, have no doubt in mind that this Congress would be successful just as the two previous ones had been.

Let me also reiterate the support and contributions you had given, both as a chapter and as individuals, and continue to give, to the Buhari-led administration since 2015 up till now.

As unapologetic progressives that you are, your support and contributions, both in cash and kind, that you had extended, and will continue to extend, to the progressive government of President Muhamadu Buhari are evidently and seamlessly being extended to the APC Presidential candidate Asiwaju Bola Ahmed Tinubu who, God willing, will succeed the current President.

It is therefore important for me to bring to your attention at this gathering that this Presidential campaign, which our principal has started in earnest, having gone to some states within a short space of time since the campaign started, while his main opponent is still junketing around the world looking for who would help him to perfect the “Dubai Strategy”, is going to rest on two pedestals.

The two pedestals on which our campaign would be hinged would be about the accomplishments of President Muhamadu Buhari, most especially his giant strides in the nation’s infrastructural development, most of which are quite unprecedented and Tinubu’s superlative achievements when he was the Governor of Lagos State.

When I say that President Buhari should be commended and advertised as the first Chief of State in the history of our country to have significantly developed our infrastructures, I’m not saying this with tongue in cheek because pieces of evidence abound.

However, I am also not unmindful of the fact that the security and economic challenges our country is facing, the latter having been exacerbated by the global economic downturns, if not meltdowns in some cases due to the COVID-19 pandemic, have almost drowned the many firsts that President Buhari had scored in infrastructural development and other areas.

It may sound like I am preaching to the singing group when I talk about infrastructural development because you know what this means in real terms. Our nation simply cannot attain the socioeconomic development it deserves without some heavy dose of modern infrastructure. They are simply sine qua non to our development aspiration.

It is therefore important to emphasize the continuation of this infrastructural development in the Tinubu/Shettima administration. Since you’re a significant part of the campaign, this point must be brought into the fore because your people, even people with ulterior motives, will ask you when you’re doing your grassroots, family-to-family, son-daughter-to-parent, person-to-person campaign whether it makes sense to continue on the infrastructural development trajectory when we have to borrow.

The second plank of our campaign, as mentioned earlier, is the superlative (a good number of them unprecedented), accomplishments of Asiwaju Bola Ahmed Tinubu as the governor of Lagos State for eight straight years.

Since space and time will not permit me to reel out these legions of accomplishments at this Congress (and you’re already aware of them anyway), what I want to say here is that it is even annoying that Asiwaju’s opponents are still in the race with him at this time when what Asiwaju achieved in human and material terms are compared with that of Alhaji Atiku Abubakar and Peter Gregory Obi.

In saner climes, the voters would have expressed their opinions about the three major contenders, and by now that Abubakar and Obi would have withdrawn from the race in order not to lose their deposits any further. That they’re still in the race with Asiwaju Bola Ahmed Tinubu, it seems to me, is not only an irony but a paradox in our country’s electioneering campaign.

Please recall that the title of this paper is “Nigerians in Diaspora as a catalyst for a New Nigeria.” I chose this title deliberately. The title is not only to underscore the importance of a nation’s Diaspora in her developmental trajectory, but it is also to emphasize the fact that this is the very first time in the history of electioneering campaigns in our country that a major political party has brought our Diaspora into such prominence as did the All Progressives Congress (APC).

We can all attest to this prominence with the creation of the Nigerians in Diaspora Commission (NiDCOM) by President Muhamadu Buhari, which was the first of its kind. Our party’s commitment to Nigerians in Diaspora was also demonstrated during the APC convention in which Diaspora representatives were given the floor, so to speak, to address the world.

What is more, a Diaspora Directorate was also created as part of the Tinubu/Shettima Presidential Campaign Council with my humble self as its Director. What more can we ask for?

Oh, lest I forget. The Diaspora Voting initiative which is one of your hearts’ desires from the Nigerian federation is no longer a question of if but when because of its inclusion in the party’s manifesto for this campaign and Tinubu/Shettima Action Plan.

You can now see in vivid color, ladies and gentlemen, why Nigerians from all walks of life in the Diaspora should support Asiwaju Bola Ahmed Tinubu to become the next President of the Federal Republic of Nigeria.

It is also obvious that Asiwaju would make Nigeria a country that the Diaspora would be proud to call home, based on his Action Plan, just as he made Lagos State home for Nigerians from all parts of the country, including people from the African subcontinent. We must roll up our sleeves to make this happen. And it shall happen by the Grace of the Almighty.

As a body that has always been in the trenches in this campaign for the actualisation of Asiwaju’s presidential bid, you’re already an automatic partner with the Diaspora Directorate. Therefore, working with APC-USA and all progressives in the Diaspora as well as Asiwaju-inclined Support Groups to deliver Asiwaju, whose mandate we’re all standing on election day is my first line charge.

We would also work assiduously to bring on board other Nigerians in Diaspora who are yet to be convinced that Asiwaju Bola Ahmed Tinubu will be our next president. With your support and advocacy, our campaign would be taken to supporters of other candidates to convince them that it is in their enlightened self-interests to join forces with us so that they would be on the side of history come February 25th, 2023.

In conclusion, it is a great privilege you have accorded me to address you on this all-important Third Congress. It’s an invaluable privilege as it would not only allow me to brainstorm with you on better ways to prosecute this campaign while I am here but simply being among you would undoubtedly give me a breath of fresh air with which I would be rejuvenated by the time I’m back at my base for the challenging task ahead.

Victory shall be ours by the Grace of the Almighty.

Thank you for listening!