HomeMetro"I don't take order from you" CSP to Sanwoolu.
Metro

“I don’t take order from you” CSP to Sanwoolu. 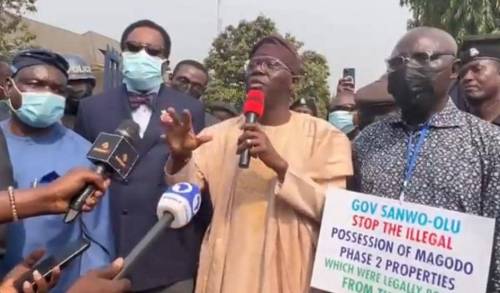 The fake progressives of south west who abandoned all principles they pretended to stand for for over 3 decades because of desperation for federal honey pot should now appreciate the necessity for sovereign national conference, restructuring, federalism, resource control, ethnic self determination and national question in a unitary system wrongly tagged Federal Republic of Nigeria with a false constitution of “We the People..”

This is the worst set of progressives that ever existed in south west, they stand for nothing, see nothing and say nothing. Anyrime I want to amuse myself, I will just google what many of them said in time past during media interviews, rallies and campaigns on restructuring, resource control, national conference and the rest. It’s always a good rendezvous with history. At times, I ask myself that with what concepts will they campaign now? Anyway, there won’t be any serious campaign but rice & indomie distribution, vote buying and zazu zeh dancing, vote rigging and gunshots competition with PDP, their rogue counterparts in election banditry. And of course, their 2 for kobo cheap rogue sub-intellectuals and Abobakus will be out to defend their leaders’ election banditry.

When you run away from a problem that needs to be resolved, the problem runs after you catch up with you and splashes it on your face. Good leaders don’t look at personal selfish interests alone but common good.and a better nation on collective agreement and understanding of all. Adeola Soetan Emperor of Olumo Republic