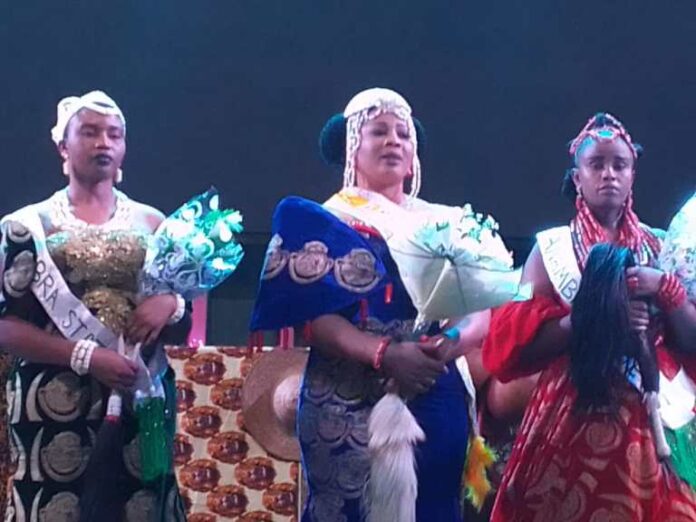 The event organized by an Igbo socio-cultural organization, Ndigbo United Forum (NUF), was meant to showcase and promote Igbo language, culture and tradition, artistry, dress code, among other things.

Speaking during the event, the chairman, Board of Trustees (BoT) of the NUF, Chief (Hon.) Dr. Chinedu Mba, said that the event was Organized to showcase the rich language, cultures and tradition of the Igbo people.

He disclosed that the maiden edition of the Ada Ndigbo cultural pageantry, held in 2021, was organized in Enugu State, before the second edition held in Anambra; adding that subsequent ones will be rotated among other Igbo speaking states.

According to him, over 50 aspirants from the 7 states picked interest forms to contest the exhaled office; from where the 12 contestants were shortlisted for the finals.

He said that among major things considered in the contest, besides physical beauty, include fluency and mastery of spoken and written Igbo language and proverbs, folklore, cultural norms, and the ability to dress appropriately in Igbo attire, among other considerations.

The President General of Ndigbo United Forum worldwide, Chief (Dr) Gabriel Ifeanyichukwu Iyoh, said that the event, besides helping to promote the people’s language and culture, will also help unite the Igbo states, especially as the hosting rites will be rotated among the participating states.

Speaking, Governor Charles Soludo of Anambra State, commended the group for the noble initiative geared towards checkmating the decline of Igbo language and tradition.

Represented by the state’s Commissioner for Culture, Entertainment and Tourism, Hon. Donatus Nduka Onyenji, the governor urged the group to extend the evangelization to schools, churches and homes, to help permeate the gospel of promoting the language in the psyche of the people.

Regretting that the use of Igbo language is truly declining by the day, Soludo encouraged parents and teachers to be in the forefront of the campaign by propagating the language in their children.

Former Nigeria’s beauty queen, Ambassador Bianca Ojukwu, represented by the Secretary General of the Onitsha Main Market, Comrade Obijekwu Pat Ifediora, urged mothers never to play down on prioritizing the use of the language in bringing their children up; saying that failure to do so will be too detrimental to the household, and the larger society.

While crowning the new Ada Ndi Igbo cultural beauty queen, the outgoing Igbo cultural queen, Princess Eziamaka Ezeugwu, called on the new face of Igbo culture to be good ambassador of the Igbo people, and further urged her to use her good office to ensure that the language takes it’s pride of place.

In her response, the new Ada Ndi Igbo, Ujunwa Anineji, promised to use her office to ensure that Igbo language, culture and ideals are promoted both within and outside the classroom. While praising the organizers for giving her the opportunity to express herself, she further assured that she would not disappoint in all the things expected of her as Ada Ndi Igbo.

Earlier, chairman of the occasion, Hon. (Sir) Pete Ibida, congratulated both the organizers and the new Ada Ndi Igbo, and assured them of his continued support.

Ibida, the Chief Whip of the Anambra State House of Assembly, and House of Representatives candidate of the All Progressive Grand Alliance (APGA) for Njikoka, Anocha and Dunukofia, urged the group to continue in their strides to redeem the very soul of Igbo language.

Cultural musics and entertainment by different band groups, including the Bright Chimezie Music Band, added colour to the event.