HomeInterview‘Bob wouldn’t be Bob without Rita’: Ziggy Marley on his mother and...
Interview

‘Bob wouldn’t be Bob without Rita’: Ziggy Marley on his mother and father 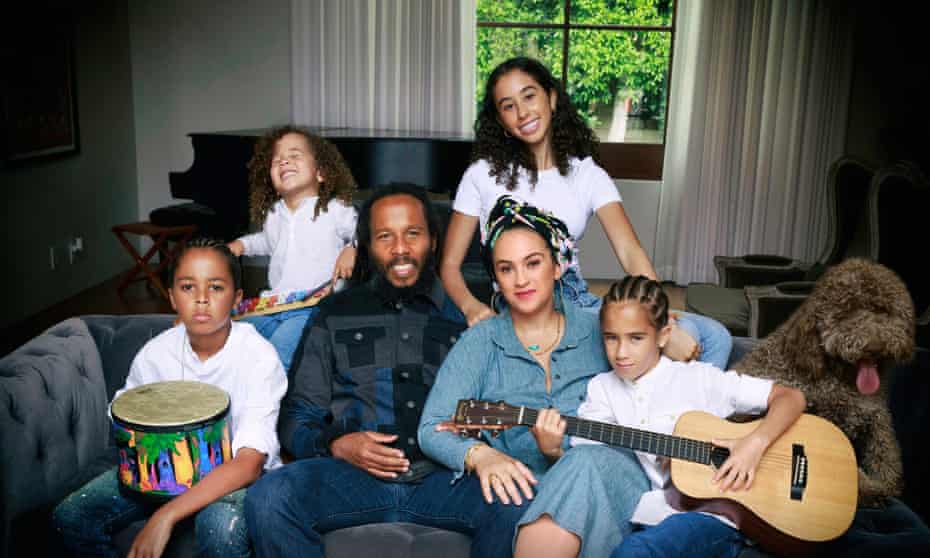 With an exhibition featuring unseen photos of the singer opening in London, his son talks about his father’s passion for sport – and the night he was shot.

Ziggy Marley was only eight years old when his mum and dad – the reggae great Bob Marley – were shot in an apparent assassination attempt inside their home in Kingston, Jamaica. But he remembers it like yesterday.

“Cops came for us children in the middle of the night and carried us away to a secret hideaway up in the hills – no one really knew what was happening. It was scary but it was kind of exciting,” he says.

Yet just two days later, on 5 December 1976, Bob Marley insisted on playing the Smile Jamaica Concert at Kingston’s National Heroes Park, as planned – even though he had bullet wounds in his arm and chest. The gig was seen as a rallying cry for peace against the backdrop of Jamaica’s spiralling violence and political unrest, with 80,000 people watching Marley swagger his way through classics including Get Up Stand Up.

For reggae fans it’s the stuff of legend, though Ziggy insists his mother, who had been shot in the head on that night, deserves equal credit. “She still showed up for the show, the same as he did. I’m proud of both my dad and my mum because there’s a team work going on between them. Bob wouldn’t be Bob without Rita, you know what I’m saying?”

Now 53, Ziggy is speaking to the Observer on the eve of a new exhibition about his father’s life and influences opening at the Saatchi Gallery in London next month.

It’s the latest celebration of a singer who four decades after his death from cancer, aged 36, is still one of the bestselling artists in the world. His posthumous greatest hits album, Legend, released in 1984, has spent more than 950 weeks in the UK top 100 and has sold more than 25m copies worldwide.

The exhibition – which includes a giant vinyl installation of Legend – is pitched as a “multi-sensory experience” with numerous rooms and spaces, each highlighting different aspects of Marley’s life. One room, for example, is designed as a forest with the sounds and smells of Jamaica, the visual backdrop to many of the songs.

In another space, they have recreated a concrete urban landscape with huge art installations and there’s even a mock-up of the backstage corridor of a Bob Marley and the Wailers concert. A silent disco, which they’re calling the Soul Shakedown Studio, invites visitors to don headphones and groove to a reggae dance party.

But the highlight of the show is arguably a collection of never-seen images of Marley himself.

Ziggy explains that they were discovered in the storage locker of photographer Jean Bernard Sohiez, who died last year and whose two dozen photos are all seemingly taken on the same day in Kingston, more or less a year before Marley’s death.

They are un-posed candid shots, some capturing the singer playing football, whichhe said was his greatest passion after music.

“He was fanatical,” agrees Ziggy. “It was a big part of his life, and my life as a child around him, but it wasn’t just about football – he loved all sports. He loved boxing, running, table tennis, he was a sporty guy.”

He would sometimes come to Ziggy’s primary school and play against his teammates, he says, adding: “He was fast and he had a good kick.” He laughs out loud though at the idea his dad’s game was on a professional level, as friends who played with him have claimed.

“That was his aspiration!” he quips.

He thinks playing football was a way for Marley to alleviate some of the pressures of his day-to-day life. His dad was always in demand, he says, and sometimes it felt like everyone wanted a piece of him.

“Football helped him free his mind,” he says.

Disturbed by the shooting at his home, Marley moved to London for a spell, living in the relative calm of 42 Oakley Street in Chelsea. It’s there that he wrote one of his most enduring songs, Three Little Birds.

Ziggy stayed on in Jamaica along with the rest of his siblings (Marley had 11 acknowledged children) but claims he didn’t miss his father during the separation. Not because he didn’t love him, but through necessity, he says.

“When you reflect back you can feel sad, but in that moment you gotta do what you gotta do,” he says. “I had to go to school, there were a lot of things going on, so you just get on with it.”

Ziggy (a nickname his dad gave him, meaning “little spliff’’) was 12 when Marley died. He even performed at the funeral. And in a wider sense he’s “got on with it” all his adult life, carving his own niche as a top recording artist. He’s an eight-time Grammy award winner, picking up best reggae album seven times, most recently in 2017.

Ziggy has a similar Trenchtown accent to his father, although he’s been living in Los Angeles with his wife Orly and four children for around 15 years now.

He knows he’ll never step completely out of his father’s shadow and he admits that some people want him to be his father. There’s always an expectation that he will do covers of Bob Marley songs at his live events, but that’s something he says he’s more than happy to do.

Sometimes he does tours where he only sings his father’s songs.

He doesn’t have a favourite one, but singles out Redemption Song as the one that is closest to his heart. It’s a song that was played a great deal around the time his father died, he says, and it meant so much to so many people.

“It carries a lot of emotional connection for me.”