HomeNewsBENUE 2023: I Am Contesting For Governorship Based On My Achievements, Says...
NewsPolitics

BENUE 2023: I Am Contesting For Governorship Based On My Achievements, Says Hembe 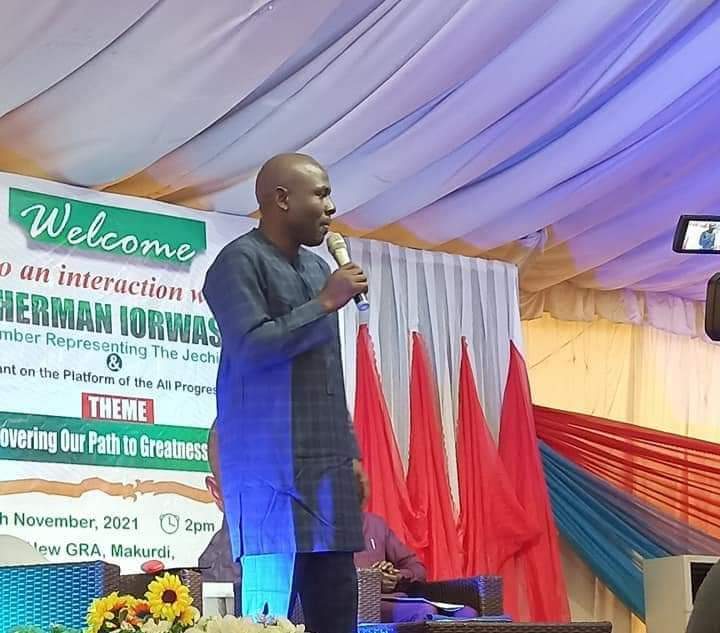 Vows to change the narrative. To incorporate academias in his administration. To avoid blame game during his time.By Paul Igbashangev

Member representing Vandeikya/Konshisha Federal Constituency and the Top Contender for Benue State Gubernatorial Race 2023, Rt. Hon. Hembe Iorwase Herman has said that he is contesting to pilot the affairs of Benue State come 2023 because of his track records of achievements in his constituency stressing that those who utilize the little they have to impact lives can do better when given bigger tasks.

Hon. Herman Hembe made this known today at Newcastle Event Center in Makurdi the state headquarters during his interactive session with the academias in the state which was tagged ”BENUE: Rediscovering Our Path to Greatness

”Speaking at the occasion, the Reps Member advised the good people of Benue State to vote and rally around him who has the burning desires to perform well for the development of the state.

Rt. Hon. Hembe said if he is contesting the gubernatorial election in Benue State for personal aggrandizement, God should not give him victory, but if he is running to bring the lost glory of the state and better the lives of the people, God should Grant him victory.

He gave the academias a sound hope and sense of belonging that if he wins he will incorporate them into his administration stressing that even the military regimes in the country for time past recorded huge success because they incorporated the academias since they the academias are the backbone of any developmental society.

He said his victory since he joined politics is traced to God and the masses.

“I have always won elections through the grace of God and the support of my people. I am not the creation of any godfather. I am a creation of God the Father. For this reason, I have always strived to do right by my conscience and the people who elect me.”Hembe added.

During the interactive session, Rt. Hon. Herman Iorwase Hembe said he is not a friend and an associate to failure, fiasco and debacle because his people may throw him away when he needs something bigger that is why he has a burning heart for development.

The lawmaker cried bitterly how the state is lagging behind in terms of development quoting that states who were created after Benue are doing well.

“It is lamentable where we have found out state, we don’t need to play a blame game but all hands should be on deck to savage the sinking Benue State come 2023. I will run a government free of blame game, I will not instruct anybody to challenge any past administration, we will only work towards making our state a better place” He added.

You will recall that Hon. Hembe has won elections to represent his constituency at the House of Representatives for a period of four times. He won the first and second elections under the platform PDP. The third one was in APC and the last one in APGA. His people love and are ready to vote him because of his burning desire to perform.

From the nook and cranny of Benue State, nobody will accuse Hembe of non-performance.

Recall that the people of Jechira were in darkness till Rt. Hon. Hembe was elected since then the people have been enjoying electricity. Projects ranging from classroom blocks, boreholes, rural electrification, bridges and road construction are found in all the kindred of Vandeikya and Konshisha Local Government Councils courtesy of Hembe and he promised to extend such gestures to all the 23 LGAs of the state of elected.

Speaking on separate notes, lecturers of tertiary institutions in the state, secondary schools and primary schools teachers advised members of the public to queue behind Hembe who has the state at heart to utilize the golden opportunity come 2023 to make history by savaging the sinking Benue so that the state will reclaim its lost glory.

The event which was filled to capacity was attended by lecturers in the state and few people from all areas of human endeavors and majority streamed live on social media of Facebook, Instagram and the popular Zoom.